The efforts of individual countries to access the gas fields in the south-eastern part of the Mediterranean make the area very vulnerable to new conflicts and war and can also lead to a dispute within NATO and affect Europe’s energy security, putting the EASTMED pipeline in question. The war for natural resources is looming large.

The first problem is the relationship between Cyprus and Turkey. Ankara, the only capital which recognizes North Cyprus, says that all activities related to the extraction of gas in the Cypriot area are an encroachment on the interests of North Cyprus. While Turkey does not recognize agreements between Cyprus and other countries on the issue of economic exclusive zone (EEZ) or licenses for gas exploration in Cypriot territorial waters, Nicosia holds the opposite opinion. Ankara, through the Turkish Petroleum Corporation (TPAO) puts forward claims that it is entitled to look for gas and oil in Cypriot waters and has the right to defend its interests there. Cyprus issued a number of concessions to various mining companies on more than half of the blocks (i.e. parts of the economic exclusive zone on which companies could explore gas or oil) located within the Cypriot EZZ. President Erdoğan warned Cyprus and international gas exploration companies that the violation of Turkish interests would have bad consequences.1)Erdogan warns Greece, Cyprus over gas search, Aegean islets, ABC News 2018-02-13.In the middle of February 2018 the warning was made good and so the Saipem 1200 mining vessel operating for Italian company – Eni was blocked by Turkish ships. Italy responded by sending a military ship to the area.2)Italy sends frigate to Cyprus’s EEZ, Ekathimerini 2018-02-13.This shows how explosive the situation is now that two NATO member states want to pursue economic goals without backing them with diplomacy. 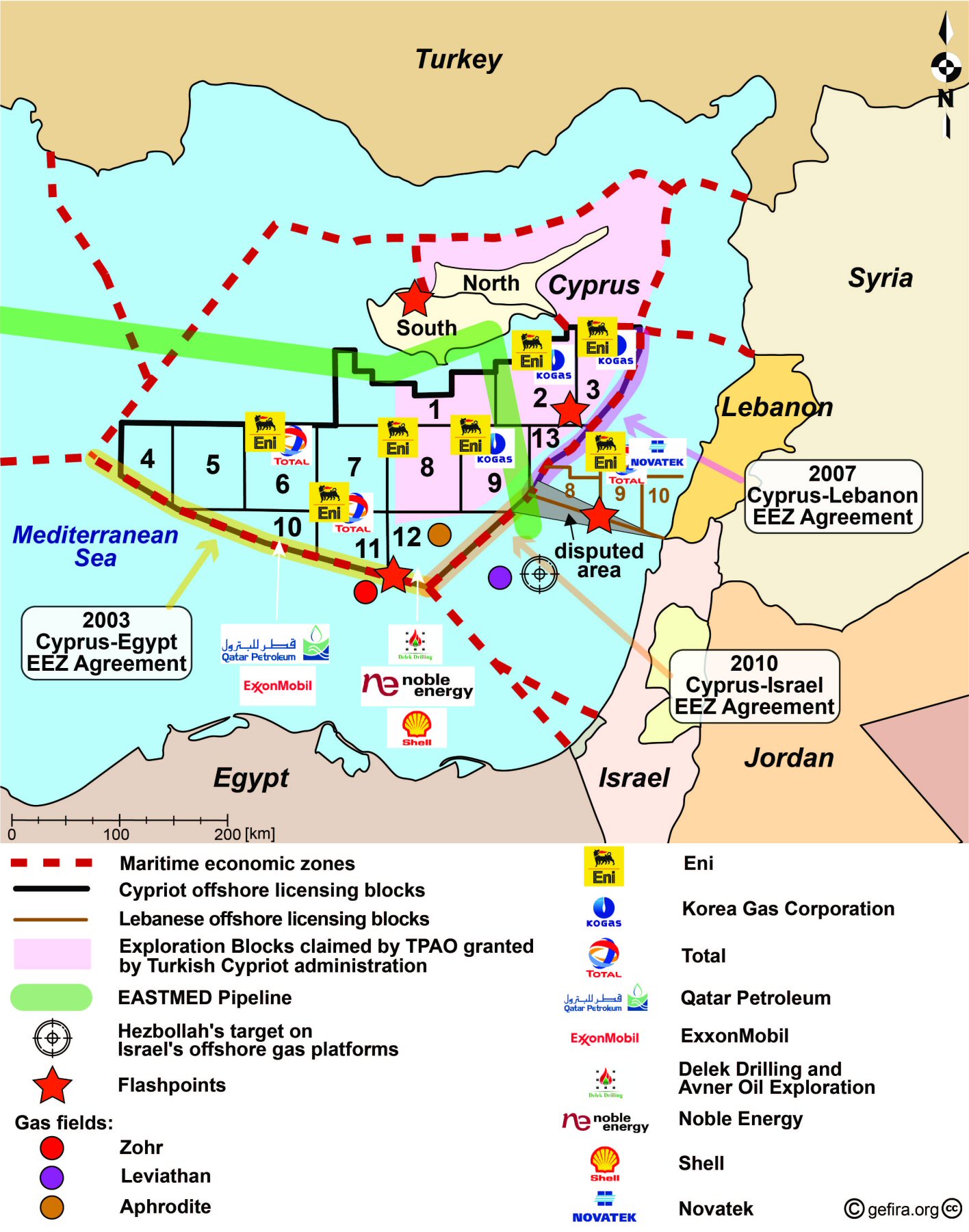 It is worth mentioning that also in February a Turkish coast guard boat rammed a Greek patrol ship in the Aegean Sea,3)Greece says won’t tolerate border challenges after Turkish collision, Reuters 2018-02-15.which shows that the Turkish government is willing to use military force.

The deepening cooperation between Cyprus, Greece, Israel and Italy regarding the EastMed gas pipeline project4)Greece, Cyprus, Italy, Israel sign MoU for East Med gas pipeline, New Europe 2017-12,05.is another flashpoint. The new pipeline, whose aim will be to supply gas from the Caspian Sea to Southern Europe, would weaken the transit role of the Turkish TANAP.

Another potential conflict is the one between Turkey and Egypt over the rich Zohr gas field discovered only in 2015. Ankara does not recognize the 2003 Cypriot-Egyptian EEZ accords and the 2013 sea border agreements between Cairo and Nicosia, which assign the Zohr gas field to Egypt.5)Egypt defends Cyprus gas deal after Turkey criticism, Daily Mail 2018-02-08.6)Egypt rejects Turkey’s stance on Cyprus demarcation agreement, Energy Egypt 2018-02-09.At the beginning of February 2018, the Egyptian government warned Turkey that further interference in this area would be met with a decisive reaction.7)Egypt warns Turkey over eastern Mediterranean economic interests, Reuters 2018-02-07.

The relations between Turkey and Egypt are already strained. Though Turkey was a supporter of the Egyptian Brotherhood and Mohamed Mursi, who took power in Egypt in 2011, nowadays there is no love lost between Ankara and Cairo, because in 2013 the Trukey-friendly government was toppled. In a 2016 interview, President Erdoğan gave vent to his anger, calling the current Egyptian President Abdel Fattah al-Sisi, a “putschist” who killed thousands of his own people.8)Erdoğan blasts Egypt’s ‘putschist president’ Sisi in al-Jazeera interview, Al Araby 2016-07-22.

The sea area between Israel and Lebanon is the most explosive area, which extends along the edges of three Lebanese gas exploration Blocks: 8, 9, 10 of which Block 9 is said to be the most profitable and is claimed by Israel. In the first half of February 2018, Lebanon signed a contract for exploratory and production works with Italian Eni, French Total and Russian Novatek.9)Risking Israeli dispute, Lebanon signs deal with 3 oil firms, The Washington Post 2018-02-09.Since the works are to be carried out in Block 9,10)Lebanon to begin offshore energy search in block disputed by Israel, Reuters 2018-02-09.Israel described Lebanon’s action as “very provocative”,11)Israel, Lebanon argue over offshore energy block, Cyprus Mail, 2018-01-31.paving the way for a military showdown. In response to it, the Hezbollah leader Hassan Nasr Allah threatened to target Israeli offshore gas platforms.12)Hezbollah threatens Israeli offshore gas rigs with missiles, Ynetnews 2018-06-02.

The Israeli media are already speculating about the third Lebanese war and suggest that the Hezbollah attack on Israel is inevitable.13)Rockets, missiles and more: predicting the third Lebanon war, Jeruselem Post 2018-02-09.In mid-February, US Secretary of State Rex Tillerson declared that Washington could help resolve the dispute between Israel and Lebanon, but Hasan Nasr Allah refused to have talks with the United States, a dishonest broker. Hezbollah is supported by Iran as is Lebanon by Turkey. Tel Aviv accuses Ankara of supporting Hamas, while Turkey says it merely defends Islam and Palestinians.14)Turkey rejects Israel’s claim Ankara helps Hamas, The Jerusalem Post 2018-02-15.The presence of Israeli troops in Cyprus is perceived by President Erdoğan as interference in the Turkish sphere of influence. It was in June 2017 that Israeli commandos carried out the largest military exercises so far, aimed at counteracting a possible annexation of Cyprus by Turkey.15)Israeli Commandos Heading to Cyprus for Largest-ever Drill, Haaretz 2018-02-15.

Gas deposits in the Eastern Mediterranean attract the attention of European, Russian, Iranian, Turkish and American armed forces. Cyprus occupies here a strategically important place. The number of players is a sum of the countries directly involved and their allies. Gas, like crude oil, has the potential of igniting a new wave of violent encounters between enemies and friends.