For some time now Syria and Iraq have been a place where interests of many players are clashing. The region is being devastated by civil war or a war by proxy, fought by a number of participants, where the borderline between friend and foe is sharp or vague as the case may be.

The military sorties, airstrikes and other activities are taking place on a day-to-day basis. Conflicting pieces of information that can be gleaned from a variety of sources may reflect both the factual status or the propaganda of the powers that be, hidden behind the media outlets. It is not easy to see the forest for the trees, to filter valuable data in this informational noise. Still, our readers deserve to be informed. With all this in mind, the Gefira team has made an effort to present the current situation in Syria and Iraq in an accessible graphic and textual way according to the best of our ability.

Australia
The Australian Defence Forces have an estimated 780 personnel in Iraq. At Camp Taji and other bases they have trained more than 20 000 of the Iraqi Security Forces and 3 000 federal policemen.1)After almost three decades, Australian troops not planning on leaving the region, News.com.au 2017-10-25.2)Australian troops will be in Iraq, Afghanistan for long term, says Malcom Turnbull, The Sydney Morning Herald 2017-04-25. Australia has 3 kinds of Task Groups in Iraq: 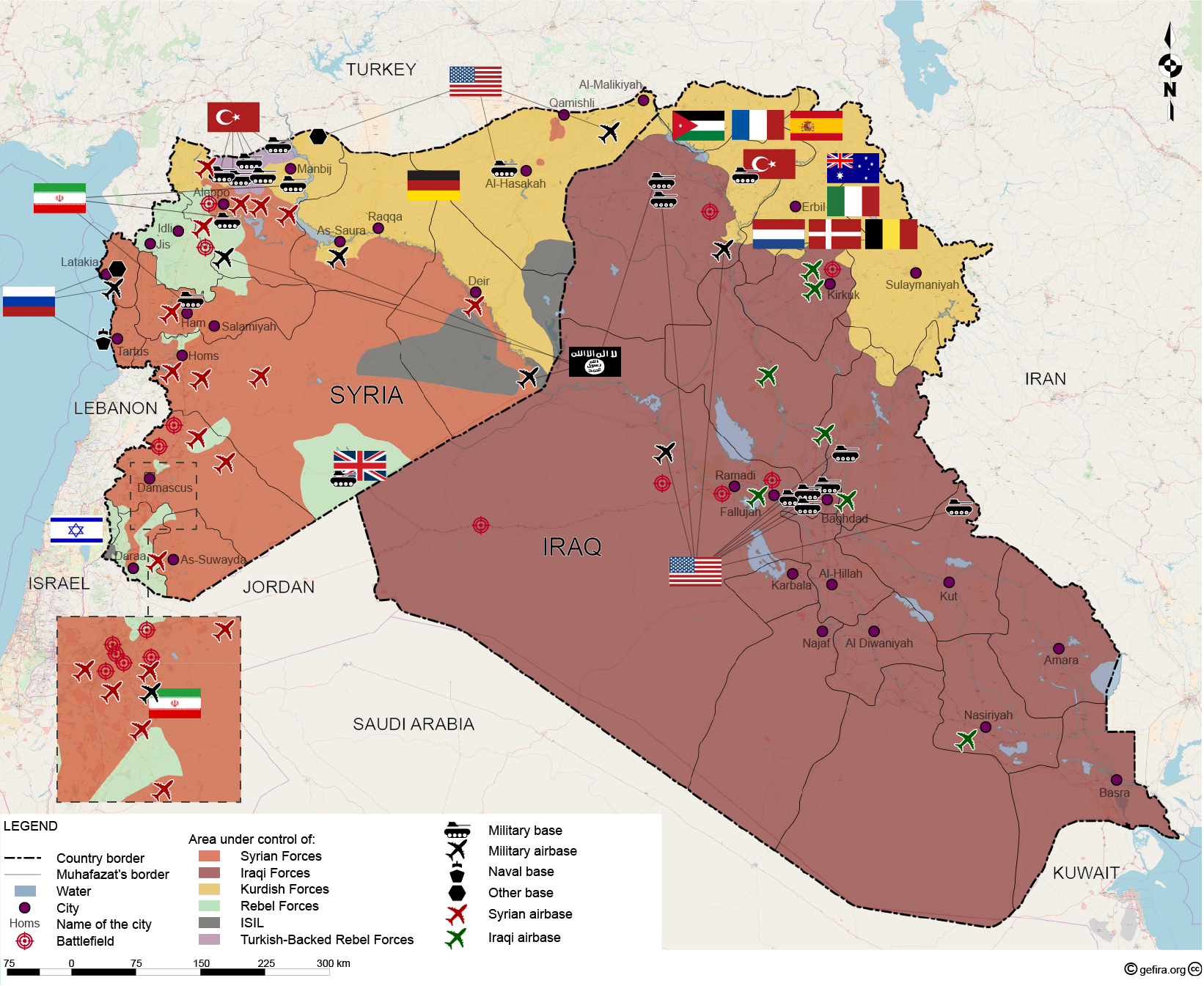 Great Britain
The Royal Air Force (RAF Typhoon and Tornado jets and Reaper drones) has flown more than 3000 missions and launched over 1 600 airstrikes across Iraq and Syria. The British Army has already trained almost 60 000 Iraqi and Kurdish troops in bases at Besmaya, Taji and al-Asad.6)Operation Shader: Britain’s War in Iraq and Syria, Warfare.Today 2017-04-04,The UK has about 600 troops in Iraq, almost all involved in training Iraqi forces,7)Theresa May makes secret visit to Iraq, The Guardian, 2017-29-11. and 80 soldiers in Camp Taji. 8)We want ‘strong, stable future’ for Iraq, says Theresa May on surprise visit to the country, Independent, 2017-11-29.
[see map]

Denmark
Denmark currently has around 120 troops stationed at the Al-Asad air base. Danish contribution in Iraq primarily consists of training Iraqi and Kurdish military units. At the end of 2016 it launched airstrikes against ISIS.9)Denmark halts airstrikes against ISIS in Iraq and Syria, Al-Masdar News 2016-12-02.10)Denmark to send special troops into Syria, The Local 2017-01-20.
[see map]

France
Operation Chammal, the French contribution to US-led military operations against Islamic State (IS), has been under way for 3 years. French aircraft have performed a total of 7 349 flights in Iraq and Syria with 1 413 strikes on Daesh and destroyed 2 197 objectives. France has supplied weapons and training to local forces in Syria and Iraq, has special forces operating in the region and has been one of the main countries bombing militants. In total, it has some 1 200 troops in its Levant operation. 11)Macron suggests France could join new fronts against Islamic State, Reuters 2017-11-09.12)Victimes civiles en Irak et Syrie: qui croit encore aux chiffres de la coalition?, Liberation 2017-11-18.
[see map]

Germany
The German contribution includes: a type 122 Augsburg frigate, six Tornado aircraft for surveillance operations in Syria, an Airbus 310 MRTT aircraft for aerial refuelling and participation of staff officers. The German government declared sending 1 200 soldiers to take part in the military operations. In fact the Bundeswehr sent between 500 and 700 soldiers.13)Germany’s engagement in resolution of the Syrian conflict, Ośrodek Studiów Wschodnich 2016-01-25.German troops have been helping train security forces in the area around Erbil in northern Iraq.14)Bundeswehr to continue training the Peshmerga, The Federal Government 2017-01-26.
[see map]

Italy
The Italian contingent in Iraq is made up of approximately 1 400 military from all services of which 400 are currently engaged in Erbil, including 120 instructors. 470 military are deployed in Mosul to protect the dam and its personnel. The Carabinieri Task Force has been operating there since June 2015. The 90 members of the Task Force have been training Iraqi federal Police Forces tasked with operations to be conducted in areas conquered back from Daesh.20)Pinotti visits Italian military in Iraq:training 25% local forces, OnuItalia.com 2017-11-22.21)Minister Pinotti’s official visit to Iraq, Ministry of Defence 2017-02-02.
[see map]

Jordan
After the downed Jordanian pilot was executed by ISIL by being burned to death, King Abdullah II vowed revenge and temporarily took the lead in the bombing raids on ISIL. Current activities include airstrikes and protection of the Jordanian border.22)Military intervention against ISIL, Wikipedia.
[see map]

The Netherlands
The Dutch military personnel are training Iraqi and Kurdish forces to fight the ISIS terrorist organization on the ground (150 trainers, advisers and security and logistic personnel, 35-man force protection for Belgian F-16).23)Dutch military contribution in Iraq, Ministry of Defence.
[see map]

Russia
Russia has deployed an S-400 air defense system, and stations Su-24 bombers at the Russian military base in Latakia.24)Latakia airbase:the hub of Russia’s Syrian bombing compain, Euronews 2015-11-12.Russians have three bases in Syria: Latakia (also listening station), Tartus naval base and Khemeimim air base. Due to Russian military activities, Syrian government forces have an advantage.25)Russia’s military bases in Syria, The Duran.The Russian military intervention started on 30.09.2015 with 4 000 military personnel.26)Russian Armed Forces casualties in Syria, Wikipedia. Moscow has used the Russian Navy a few times like the Admiral Grigorovich. 27)Russia’s cruise missile-capable frigate sets sail for Mediterranean – Navy chief, Russia Today 2017-12-01.According to the Russian Defense Ministry, the Russian fighters carried out 672 sorties and bombed over 1 450 targets to support the “offensive by the militias of eastern Euphrates tribes and Kurdish militias”.28)Russia supporting & coordinating Syrian Kurdish-led anti-ISIS battle east of Euphrates – MoD, Russia Today 2017-12-05.Independent Russian military expert Pavel Felgenhauer said that Russia had between 4 000 and 10 000 Russian troops including personnel at Russia’s airbase in Khmeimim, a stronghold of President Bashar al-Assad in northwest Syria, and at the Tartus naval facility. He said, some 2 000 to 3 000 military advisors helped the Syrian army gain an upper hand over rebels and jihadists on the ground. 29)Russia’s military presence in Syria, Yahoo 2017-11-24.Vladimir Putin announced 11.12.2017 that his forces will start withdrawing from Syria after a two-year military campaign against ISIS.30)Putin: Russian forces will start withdrawing from Syria, The Washington Post 2017-12-11.
[see map]

Spain
The Gran Capitán military base in Bismayah, which is under Spanish command and where some 450 soldiers and members of Spain’s Civil Guard are stationed, along with US, British and Portuguese personnel have helped train 6 000 Iraqi troops.31)Spain’s Defense Ministry looks to protect Iraq base from ISIS drones, El País 2017-03-27.The continued presence of the Spanish Patriot missile battery on the border between Turkey and Syria was a decision taken at the request of the Turkish Government, within the framework of the NATO.32)Spanish Ambassador: Spain’s non removal of Patriot missiles shows proof of solidarity with Turkey, Daily Sabah 2016-01-31.
[see map]

Turkey
Turkey has a military base in Iraq: in Bashiqa near Mosul, Northern Iraq and in the Shaqlawa region (near Erbil). Roughly 2 000 Turkish troops are currently in northern Iraq.34)Bashiqa base in northen Iraq will stay:President Erdogan, Hurriyet Daily News 2016-10-15.35)Withdrawal of Turkish troops from Iraq soon to come: Iraqi PM, Kurdistan 2017-07-27.In northern Syria after conducting Operation Euphrates Shield against ISIS and Kurdish militias, Turkey controls the region stretching from the city of Jarabulus on the Syria-Turkey border to Manbij, Al-Bab and northern Aleppo. Turkey is strengthening its position in the Middle East, also prevents the Kurdish state from coming into being.36)“Al-Sharq Al-Awsat” Report specifies locations of foreign military bases in Syria, says Syria is turning into Brittle Federation that can fall apart at any moment, Middle East Media Research Institute 2017-03-29.The Turkish military contingent in Syria was reduced from 8,000 to 1,500 people (also commandos, like 180 commandos in Syrian city Al-Bab).37)Turkey plans to create military base in Syria’s north, Sputnik 2017-05-15.38)Turkey sends 180 commandos to Syrian city Al-Bab, Hürriyet Daily News 2017-11-30.
[see map]