The situation in the world raises the question of whether and when there may be armed confrontation between China and Russia on the one hand and the United States on the other.
Americans have begun to implement the offshore balancing concept which means that local powers, located far away from the US, have to take care of their own security. China’s economic and military activity is very extensive. Through the Belt and Road concept Beijing is striving for domination in Eurasia and the whole world. The conflict in Ukraine is going on, US-Russian relations are strained.

Russia feels encircled by the NATO and so is strengthening its ties with China. We can also talk about a trade war between USA and Russia. Germany and France are in opposition to Trump’s administration and the role of the United States in Europe and in the world. The effectiveness of NATO is questionable. NATO member Turkey has just bought the Russian S-400 air-deference system1)Turkey signs deal to get Russian S-400 air defence missiles, BBC 2017-10-12. while Germany has put all major arms exports to NATO ally Turkey on hold.2)Germany plays arms exports trump card against Turkey, Daily News 2017-10-12. Americans do not want to lose their present dominant position. The political atmosphere in Europe and in the world is highly charged. One more impulse, one more conflict and another global war may break out. Therefore, it is well-founded to analyze forces of the global players: China, Russia and USA. 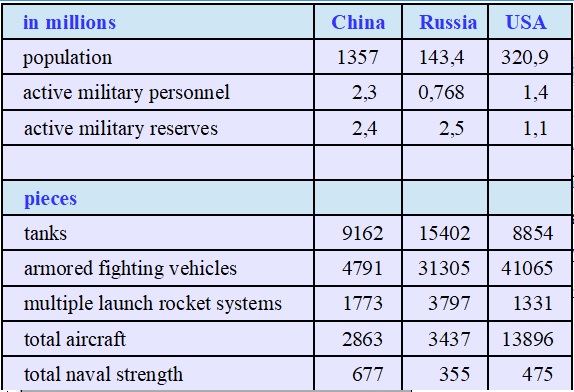 The United States has a big advantage in the numbers of helicopters, aircraft carriers (USA 20; China 1; Russia 1) and fighters (USA 2207; China 1068; Russia 772). The US has a significant advantage in the air, while the People’s Liberation Army with 2,3 mln soldiers is the most numerous. Russia has a huge number of tanks and very effective missile systems. In terms of the nuclear arsenal, Russia has an advantage over the USA whereas China has a much smaller nuclear potential. Russia’s and China’s military potentials are complementary and, combined, constitute a real threat to the US army.

China and Russia are capable of preventing America’s distant allies from coming to America’s help by isolating the prospective battlefield , which changes the balance of power against USA. The system referred to as Anti Access/Area Denial consists in the coordination and concentration of different types of weaponry, detection ability, electronic jamming, communication and the ability to down aircraft, missiles and drones thus creating a kind of protective zone, like a lampshade, that stops the enemy from accessing a given area. 5)Russian Anti-Acess Denial (A2AD) capabilities-implications for NATO, Fundacja im. Kazimierza Pułaskiego 2017-11-27.True, for centuries the warring armies have tried to prevent allies from uniting. The novelty consists in the extraordinary concentration and cooperation of forces and equipment. 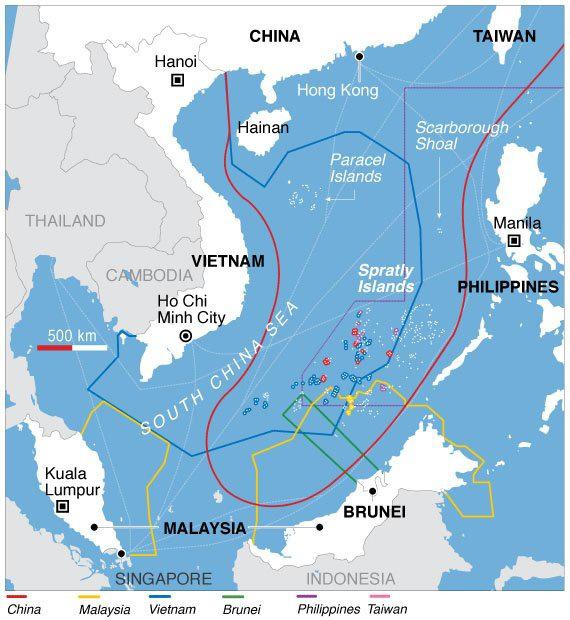 Changing the balance of power, this system and is disadvantageous to the United States. General Philip Breedlove says Russia is stronger than the United States on the Black Sea, in the neighbourhood of the Baltic states (the Kaliningrad military base) and in Syria. China created A2AD on the artificial islands on the South China Sea. Thanks to A2AD the Chinese can now destroy US aircraft carriers and warships approaching the first line of islands, which roughly runs through Malaysia, Brunei, the Phliippines, Taiwan and the Ryukyu Islands i.e. close to China’s territory,7)Jacek Bartosiak-Chiny&USA Konfrontacja, YouTube 2017-03-08.using the DF-21 anti-ship missile called the aircraft carrier killer which has a range of 1500-2000 km. In 2020 China will be able to hit targets in between the second chain of islands stretching between Tokyo and New Guinea and the mainland.8)Morze Południowochińskie jako miejsce rywalizacji geopolitycznej i wyścigu zbrojeń morskich w Azji Południowo-Wschodniej- Łukasz Stach, Paulina, Przegląd geopolityczny 2017.

Not without a significance is demography. Conscripts reflect a country’s uniform or diverse ethnic breakdown. Soldiers of a uniform national state have a greater fighting spirit. Such countries are China and largely Russia. In the USA for example almost 5 percent of the population are Asians, and over 16 percent Latinos, which means a lot now that the relations with Mexico are deteriorating.9)Race and ethnicity in the United States, Wikipedia.

What must the world reckon with?