Flammable ice, as sometimes methane clathrates (or hydrates) are called, lately has become an important issue for global powers. Attaining technology making it possible to extract resource from deposits, which haven’t been up to now taken into consideration may change the face of world economy and influence the prices of LNG.

To many, methane clathrates sound unfamiliar so lets explain briefly what we’re talking about and why they haven’t been extracted yet. The hydrates emerge when molecules are surrounded by water, which becomes a sort of a cage for them. Such substance looks like ice and is present underneath the earth or underwater (yet, only there, where the appropriate tension and temperature exist). What’s important, when the conditions change, such clathrates become highly unstable and may cause huge explosions and, as a result, landslips and submarine landslides. That’s why any intrusion and extraction-attempts are extremely dangerous and complicated. However, mining tests have already been conducted for a few years. Though the estimates aren’t much reliable, it’s believed that methane hydrates contain more of gas than any other known fossil fuels put together. According to the US Energy Information Administration there may be even 2.800 trillion m3 of gas in hydrates, whereas the current global production equals up to 3.5 billion m3. So it’s possible that the extraction of clathrates would meet humanity’s demand for methane for another few hundred years.1)Japan and China successfully extract ‘combustible ice’ from seafloor in potential energy breakthrough, Independent 2017-05-19.

Currently, several states are conducting research on the production of such gas. In May, China informed that there was a breakthrough during the tests ran at their platform based in the South China Sea and the possibility to extract the daily amount of up to 16 thousand m3 of gas has been confirmed.2)China claims breakthrough in mining ‘flammable ice’, BBC 2017-05-19.In the first week of July the government stated the six-week attempt has been successfully ended. The technological capabilities were checked and the estimates concerning the possible commercial start of production were made. Up to June 21st the total of 230 thousand m3 of gas has been extracted and the daily production totaled 6800 m3. One of the main Chinese geological institutions made a statement that the country may have access to the amount of clathrates equivalent to 80 billion tons of oil. Commercial production has been announced to begin in 2030.3)China opens up new energy front as it succeeds in tapping gas hydrates, Chemistry World 2017-07-03.

Four years ago a Japanese corporation conducted a six-day trial which ended in extracting 20 thousand m3 of gas daily. Private commercial initiatives are likely to begin in the first half of the next decade.4)Can ‘Fire Ice’ Replace Shale? OilPrice 2017-06-28.At this point another two attempts intending to develop the technology were finished. One of the wells provided 200 thousand. m3 of the resource within two weeks.5)Second Offshore Methane Hydrate Production Test Finishes, METI 2017-06-29.According to OilPrice, the United States is interested in research which focuses on the Gulf of Mexico. The study is supposed to be as important as the discovery of shale-extraction technology.6)Can ‘Fire Ice’ Replace Shale?, OilPrice 2017-06-28.Except for that the US is supporting its partners in Japan and India. In the Bay of Bengal deposits of up to 933 trillion m3 were found. In the financial year 2015-2016 alone Prime Minister Narendra Modi decided to appropriate Rs. 1179 crore for oceanographic research in general, which include also those concerning clathrates.7)India’s gas hydrates, Oil&Gas Financial Journal 2017-02-20.

It’s worth mentioning that in 2014 the settlement ending the dispute between India and Bangladesh over maritime border came into force. As a result, Dhaka probably has access to the resource as well. Up to now the state has been interested mainly in oil,8)Bangladesh: Asia’s New Energy Superpower?, The Diplomat 2014-11-14.but there’s a possibility that in the next few years we’ll hear about its venture into methane hydrates.

The commercial mining of clathrates will influence the situation on global markets. It is presumed that the demand for oil will decrease and the importance of OPEC states and Russia as energy-suppliers may diminish9)Can ‘Fire Ice’ Replace Shale?, OilPrice 2017-06-28.Clathrates are present off the coast both of the states which have access to other deposits of the resource (such as the US), and those which are highly dependent on external supplies (for instance Japan).10)Can ‘Fire Ice’ Replace Shale?, OilPrice 2017-06-28.For Japan – the biggest LNG importer in the world – gaining the possibility to extract gas for hydrates presents an opportunity to become self-reliant and to limit the significance of nuclear energy.11)China taps ‘combustible ice’ for growing energy needs, Dawn 2017-07-02.

The states that are relatively weak, may gain in importance. Lots of “flammable ice” is placed underneath off the coast of Africa in the Gulf of Guinea. If the know-how spread, the states of this region might become potential economic partners in providing cheap energy. For example in Nigeria there are few people who understood the potential that lies underwater and call for continental shelf regulation. Because of the resources it’s strategically meaningful. However, one of the problems is the maritime boundary dispute between Nigeria, Cameroon and Equatorial Guinea.12)An Urgent Need for Continental Shelf Regulation in Nigeria, Stratfor 2016-10-19.

In Asia, the Philippines, which own The Benham Rise, may become significant. This resource-rich area may be the source of Manila’s future rise as a gas-exporting country.13)Vast Deposits of Methane Hydrate in Benham Rise Could Turn the Philippines into a Natural Gas Exporter, Modern Tribune 2016-02-17.On the other hand it may draw attention of much stronger states which are also interested in having a piece of the pie. It comes as no surprise that China looks to the Philippines. In March Chinese ships were spotted in its neighbours’ waters. At first, the action was criticized by Manila’s Defense Secretary. Later it was revealed that president Duterte had an agreement with Beijing related to sending research vessels.14)Duterte: China allowed to survey Benham Rise, PhilStar 2017-03-14.Their purpose remains unknown. We can only assume that China is interested in deposits in Benham Rise. 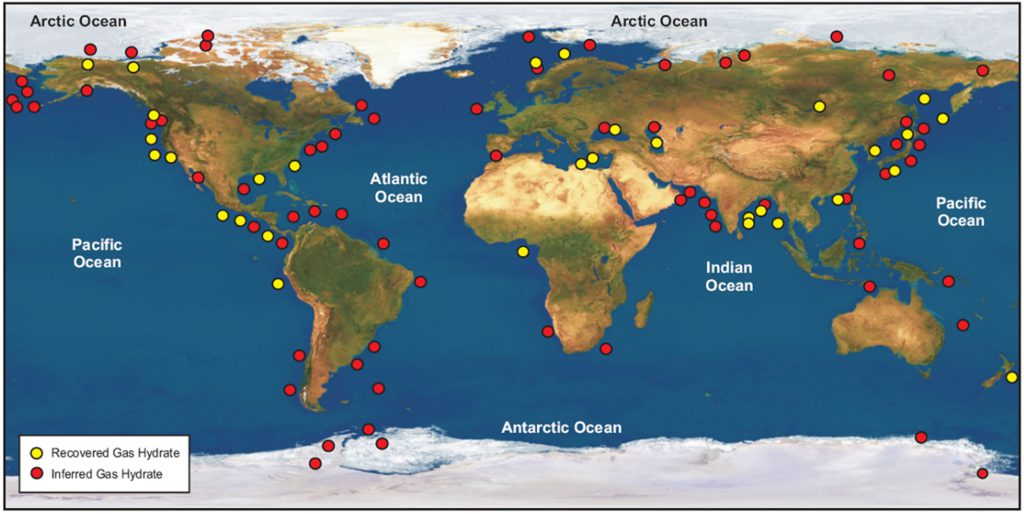 If the interest in the production of gas from hydrates continues to rise, we can expect the territorial disputes in the South China Sea to escalate. China’s claims are huge and Beijing is ready to resort to threats. The Philippines was informed that in case of commencing drilling in the so-called “West Philippine Sea”, it needs to brace itself for war.15)Why China will declare war if PH drills for oil, Inquirer 2017-06-08.The Spratly Islands, which have been the subject of dispute for decades, are becoming more important than ever thanks to recent geological findings. We can’t rule out the possibility that the Paracel Islands and the Senkaku Islands will also become even more significant in geopolitical terms because of China’s methane clathrate projects. China is a developing country, which has the ambition to keep its pace of economic growth. That’s why it is looking for long-term opportunities (it’s in fact a part of the strategic culture of Beijing leaders who don’t think about the next year but focus on the next decades). Beijing reflects upon its future energy security, and methane hydrates offer a viable solution to many problems. 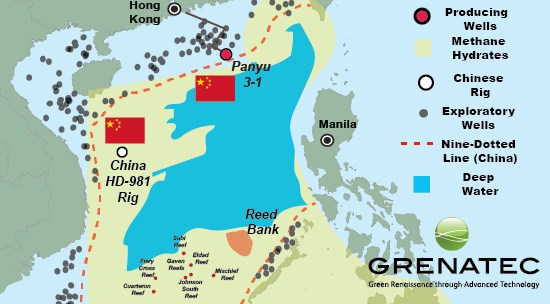 The new source of gas may also influence the policies of other states toward territorial disputes. Take Kuril Islands as an example. At the moment Japan is moderate in its policy because of the fact that Russia is its important LNG supplier. If Tokyo gains access to alternative sources of gas, it can conduct a more assertive policy.16)The Geopolitics of Natural Gas Hydrates, the Other Unconventional, Stimson 2015-01-26.https://www.stimson.org/content/geopolitics-natural-gas-hydrates-other-unconventional

Exploration of the hydrates may have colossal consequences for global gas prices. For the LNG importers the bigger the competition the better. Many of them may strike deals with Asian states. We have to remember that China is also developing its shale gas initiatives in Sichuan Basin. According to US EIA in 2040 it will be the second shale gas provider in the world.17)Shale gas production drives world natural gas production growth, U.S. Energy Information Agency 2016-08-15.In the meantime the revolution in shale gas in the US itself was a source of record price drops. The amount of shale gas and methane from hydrates may be tempting for many states to shift their whole economies to gas-based because of the increased availability of the resource.

Extracting gas from clathrates is highly controversial because of ecological issues. It is estimated that 1m3 of hydrate provides about 163 m3 of gas. The production may release enormous amounts of methane into the atmosphere and as a result the global warming will be intensified. At the same time it won’t be possible to keep its increase below the goal of 2°C if the extraction will lead to a discharge of vast quantities of carbon dioxide, which is present in many hydrate deposits.18)Are methane hydrates the next big energy source? Japan hopes so., The Washington Post 2013-03-12.What’s more the marine life may be in danger as hydrates are responsible for the stabilization of seafloor.19)Challenges of methane hydrates, Oil&Gas Financial Journal 2014-05-07.We should expect that the commercialization of such production will lead to a bunch of new initiatives, agreements and negotiations on a global level related to gas emissions. Especially, when its significance will rise in many national economies.

To sum up, we have be aware of the fact that in the next several years we may witness another revolution in the gas industry which will affect the situation on energy markets. Many new suppliers may emerge, the competition will increase, many states will become self-reliant, and the prices of the resource will drop again. At the same time the geopolitical situation related to the disputed areas will probably worsen as many of them are rich in methane hydrates. Political decision-makers will also be busy negotiating new agreements on ecological issues as exploration of a new source of energy could have more tremendous effect on the global climate than any other known up to now.