Russia is the favourite scapegoat for the Western establishment when it comes to its own failures. Ever since Brexit and Trump’s victory, the Western elite has regularly tried to link citizen discontent to “Russian disinformation“, “hackers” or “trolls“, instead of looking at its own policies. While in the US this took the form of a witch hunt against the Trump administration, in the EU it has taken the form of a “proscription list” of the media that are not enthusiastic enough with the idea of a conflict with the Eastern neighbour. Under the official purpose of countering “disinformation coming from Russia”, the EU External Action has created a “disinformation review“1)Home Page, euvsdisinfo.eu.with weekly updates on “fake news” and the websites that post them.

The EUAS officially branded researchers and journalists as fraudulent, unpatriotic and dishonest without any notification. There is a small disclaimer on the list that states that ”disinformation review cannot be considered an official EU position”. Yet it was created by the European Council, is part of the ”diplomatic service” of the EU, hence funded by it, uses its symbols and institutional addresses. So, it is part of the EU and yet does not represent its official position? The statement seems to have been made for the express purpose of dishonestly dismissing concerns raised by citizens. 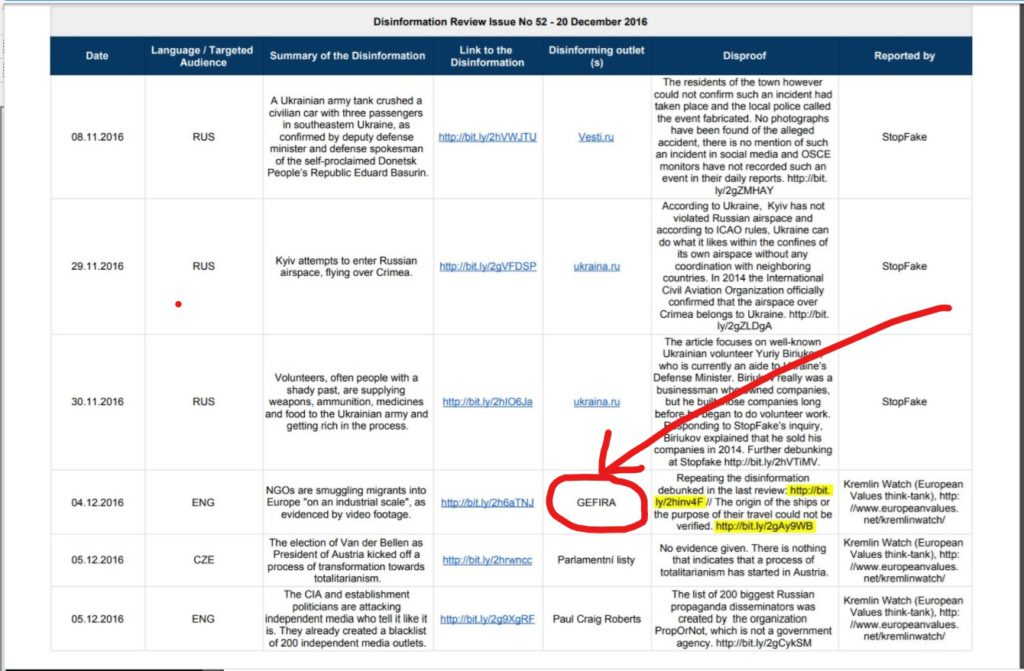 By organising the naming and shaming list, the EUAS behaves like an authoritarian regime that operates out of the rule of law. Since freedom of the press is the basis for a reliable democracy, the EUAS is working against the values of the European Union:

We won’t spend too much time addressing that. Since December the case has become a national and then international case, and recent events have seen the ship Iuventa of the NGO Jugend Rettet seized as evidence for contacts with smugglers and, as the meeting in the open sea did not happen in a situation of peril for migrants, it can’t be classified as rescue, but simply smuggling.3)Migranti, sequestrata la nave della ong Jugend Rettet. Procura Trapani: “Ha fatto trasbordi senza pericolo imminente”, Il Fatto Quotidiano 2017-08-02. Our analysis was correct.

So why were we reported? The piece is hardly about Russia to begin with. The connection is elsewhere. We found out that the report was written by an organization called “Kremlin Watch“, which is a part of the think-thank European Values. We looked at who funds them: George Soros and his Open Society the one who’s heavily involved in the migrant crisis with a vast international network of NGOs4)Soros sponsored immigration network in Italy, Gefira 2017-07-13.and locked in a personal war against Russia. Conspiracy? Not really. Open Society Foundation is listed as one of the top donors of the “European Values” Think-Thank.5)Annual Report 2015, European Values.Among the others is the European Commission itself.

The reports normally focus on the Russian media like TASS, Sputnik, RT. The same issue no. 52 also lists ZeroHedge for reblogging Ron Paul’s criticism of the “fake news” crusade, and Paul Craig Roberts’s one. In the Soros version of European values, criticism and democratic debate are fake news! Past issues include the conservative outlet Breitbart,8)Disinformation review issue no. 53, EU External Action 2017-01-12.and even The Guardian. 9)Disinformation Review, EU External Action 2016-03-15.

It’s also rather interesting to note how Mr. Soros interprets European “liberal values”. Free press is normally listed as a key one, and yet Soros wants proscription lists of anyone who disagrees, something for instance adopted by Turkish President Erdoğan following the last year’s failed coup and widely criticized by the EU itself. Another key liberal value is fair trial. Yet Soros’ own Kremlin Watch is judge, jury and executioner in one. Who does the EU belong to and serve, anyway? Its people or its financial oligarch? Perhaps Israel and Hungary are right: Mr. Soros is a threat to democracy.10)Israel backs Hungary, says financier Soros is a threat, Reuters 2017-07-10.