This affair is a huge scandal. It involves the current president of the European Council, Donald Tusk, and his son Michał. Donald Tusk presents himself as a politician who cares very much about the rule of law in Poland. When he was Poland’s prime minister, however, he ignored information given to him by the Chief of the Internal Security Agency and the President of the National Bank of Poland. They both warned him that his son was involved in a Ponzi scheme called Amber Gold.

The case is being investigated by the Polish government, which set up a special Inquiry Committee. Of course, Donald Tusk is denying all the accusations, but at the same time he is criticizing Warsaw for failing to enforce democracy and the rule of law. The question is whether Donald Tusk is not acting in self-defence and aiming at toppling the government, which set up the Inquiry Committee on the Amber Gold.

Poland’s former prime minister and currently the president of the European Council is still the spiritual leader of the political opposition in his own country and is doing his best to earn much respect in Brussels. People in Poland think he is Angela Merkel’s man, which is why he was promoted so high in the EU structures. The average Western European probably believes that Donald Tusk has been given this high-ranking post as a reward for his contribution to establishing the rule of law in Poland. The average Western European probably does not know that Donald Tusk’s Civic Platform party experienced a resounding defeat in the parliamentary election just a few months after his transfer to Brussels. The Polish people say that the promotion of the Polish prime minister may have been a helping hand extended to him by Angela Merkel, who thus paid him for his obedience and saved him from the verdict of the voters and, (who knows?) the verdict of the court of law (see below).

Currently, Donald Tusk seems to be taking steps against his own country in retaliation for the fact that the new government has set up a committee to investigate his and his son’s participation in the largest fraud of the recent years. Contrarily to his pledge of impartiality and neutrality towards all 28 member states,”1)Tusk: nie czuję się odpowiedzialny za starcie z polskim rządem, TVP INFO 2017-03-08. Donald Tusk seizes every opportunity to attack and rebuke Poland. In 2016/2017, when for almost two months the Polish parliament was occupied by the opposition, Tusk threatened Poland with legal consequences for the 2017 budget that had been passed allegedly in violation of the regulations.2)Tusk: trzeba liczyć się z poważnymi konsekwencjami, koduj24.pl 2017-01-11. Poland’s former prime minister put a pressure on the Polish authorities exactly at the time when the government’s opponents held protests in Warsaw, which means that Donald Tusk for all practical purposes was supporting an attempted coup d’etat and did his best to create bad press in the West for his own country.

Then again he used threats against Poland for not agreeing to accept the immigrant quota from Syria,3)I wszystko jasne: Tusk też grozi Polsce. Straszy konsekwencjami, bo nie chcemy przyjąć uchodźców, niezależna.pl 2017-05-17.and lately he warned against voting into law the act on the Supreme Court.4)Donald Tusk po przyjęciu ustawy o SN: Polsce grozi marginalizacja na arenie międzynarodowej, wyborczapl 2017-07-20. The western media covered each of the mentioned events in a way biased against Warsaw, creating an impression that Poland was undergoing unfavourable political changes. 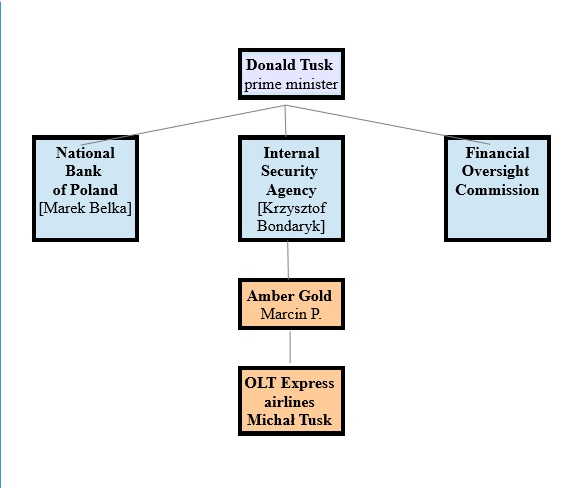 The diagram does not show the subordination of particular entities but merely the relationships that hold between them.
Consider the question again: is Donald Tusk so disapproving of the Polish government because he cares about democracy and the rule of law which are allegedly violated by Warsaw or is he driven by other motivations?

The parliamentary Inquiry Committee on Amber Gold fraud may provide an answer. Amber Gold was a Polish financial service company, which quickly earned a bad reputation of being a Ponzi scheme. It was active in between 2009-2012 and was founded by Marcin P. Marcin P. was earlier sentenced on several occasions to prison for bank frauds, embezzlement and forging of documents. Yet, all the sentences were mysteriously suspended.5)Amber Gold, Wikipedia.Amber Gold invested in precious metals and tempted clients with an attractive interest rate of 13% for their deposits. Within a few years Amber Gold cheated almost 19 thousand customers whose joint loss amounted to 850 million złotys (approx. 234 mln dollars). It transpired that the company rather than store gold as collateral for its financial activities was used as a money laundry.6)Amber Gold, Wikipedia; Komisja ds. Amber Gold: syn Tuska był politycznym parawanem, TVP INFO 2017-06-23.

Already in December 2009 the state-run Financial Oversight Commission issued a warning that Amber Gold had no permit to carry out banking activities, and least of all to accept financial deposits and expose them to risk.7)Amber Gold, Wikipedia.

Amber Gold held almost all shares in OLT Express air lines, which employed Michał Tusk, the prime minister’s son. He worked there in the RP department although he had never had anything to do with RP before. Why, then, was the prime minister’s son employed there in the first place?8)Była wiedza u najważniejszych osób w państwie o tym, że ta piramida jest, TVN24 2017-06-22.

The transcripts from the hearings of Marcin P. (Amber Gold’s president) provide some explanation. It turns out that Amber Gold regarded Michał Tusk’s employment as a kind of protective umbrella. Marcin P. admitted the following: “I employ the prime minister’s son. As long as he works for us, I think we are untouchable”.9)Dopóki Michał Tusk u nas pracował, nikt nas nie ruszył. Ujawniono stenogramy rozmów Marcina P. Do rzeczy 2017-06-25. Michał Tusk himself testified before the Committee that “together with my father we knew that the whole enterprise [Amber Gold] was, to put it bluntly, a sham”.

Donald Tusk was warned on several occasions that Amber Gold was a Ponzi scheme by the highest ranking civil servants like the president of the National Bank of Poland10)Powiedziałem, że to piramida finansowa. Belka ostrzegł Tuska przed Amber Gold?, TVN24 2014-06-16.or the chief of the Internal Security Agency.11) The prime minister did not react. Was it because OLT Express owned by Amber Gold employed his son Michał?

Also top members of Donald Tusk’s Civic Platform Party had suspicious contacts with Amber Gold’s president. The ad below shows the mayor of Gdańsk together with the local authorities and other Civic Platform politicians. They draw an OLT Express plane along the runway of the Gdańsk Airport.

Poland’s Defence Minister commented the film in parliament and said to Donald Tusk: “It is a mafia-like scheme under which nobody could as much as touch Marcin P. and I’m afraid that you [Donald Tusk] will soon be known as Donald T.”11)Paweł Adamowicz o zarzutach Antoniego Macierewicza, WPwiadomości 2012-08-31.

The parliamentary Inquiry Committee found it difficult to interrogate the people involved since they all complained about their poor memory or tried to avoid responsibility in other ways. For instance, one of the public prosecutors who in 2009 scrutinized Amber Gold was first on long-term sick leave and then applied for earlier retirement.12)Afera Amber Gold. Prokuratura Barbara Kijanko w czerwcu nie przejdzie w stan spoczynku, inferiafakty 2017-02-23.The defence minister emphasised that: „The Amber Gold fraud was only possible because both the prime minister and the intelligence services were involved”.13)Antoni Macierewicz: od dawna były hipotezy, że D. Tusk rozpiął parasol ochronny nad Amber Gold, tysol.pl 2017-06-26.This suspicion is further confirmed by a note in which an Internal Security Agency officer warned Marcin P. of impending arrests a week before the event.14)Co zeznał szef Amber Gold ? Kilka cytatów Marcina P…, niezleżna.pl 2017-06-28.

Marcin P. appears to have been used as a front man and now is being used as a scapegoat. The Inquiry Committee is trying to uncover the masterminds behind that fraud. Whether the Committee will manage to unmask them or not remains to be seen.