The United States is signaling that it is going to limit its military presence in countries far away. Maybe Donald Trump listened to those realists who have suggested for a long time that America can uphold its superpower status only if it focuses on offshore balancing strategy. No matter what the intentions really are, the US government’s declarations result in redefining foreign policies of Asian states. The limitation of American presence changes the regional distribution of power, and forces other actors to assess their alliances and to search for new partners who might be an asset in case of conflict.

Changes in the balance of power in Asia
Until the US leaves Asia, the balance is preserved. The limitation of involvement suggested by Washington results in a search for new allies by all states in the region in order to level the capabilities. America’s withdrawal gives new opportunities to China, which can extend its sphere of influence and endanger Russia and India. However, the military threat won’t appear instantly. We’ll probably witness an increase in economic penetration. The economic imperialism resulting in power maximization may be the indicator of growing revisionism understood as a policy aimed at bringing down the actual status quo in Asia and establishing a new order. 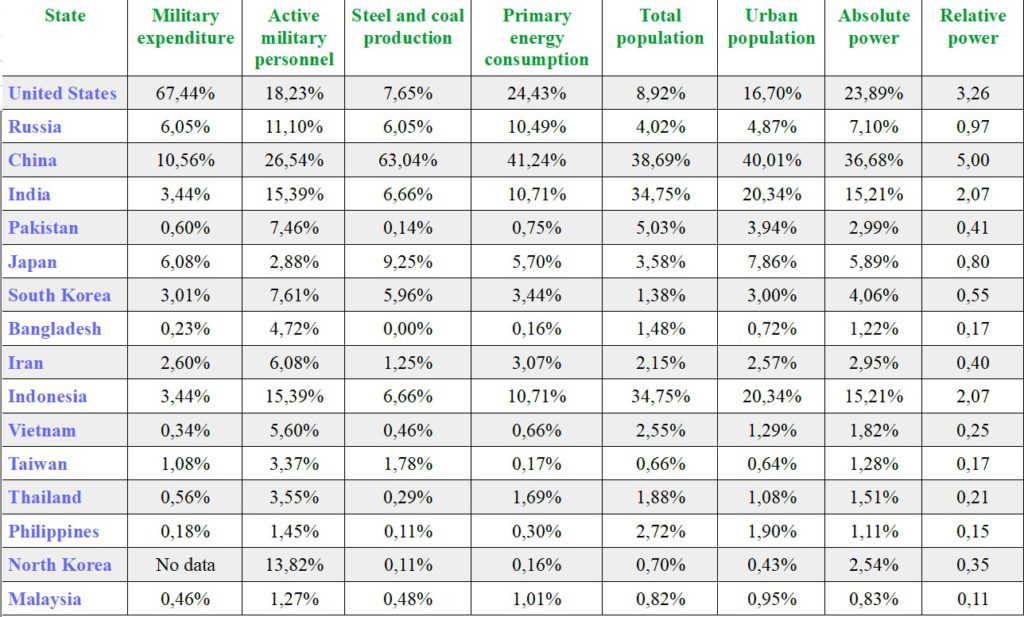 The table presented above shows the distribution of power in Asia calculated using the methodology proposed by Randall Schweller in his book Deadly Imbalances. Implementing the data provided by the Correlates of War project, one can assess the states’ absolute power (its capabilities) and relative power (power in comparison to other entities – the most powerful gets 5,00). The data sum up to 100% in every column. Though such analysis exaggerates the power of China and Indonesia due to the population of those states, it also indicates how crucial is America’s presence for maintaining the regional security system. The US support for India and Pakistan counterbalances Beijing’s capabilities. Right now those two countries have to look for alternatives. However, weaker states including Bangladesh, South Korea, Iran and Japan (we mean relative weakness of course!) also start searching for new possibilities. The listing below presents the power index calculated by the Global Firepower and the relative power estimated by us. We assume that in Asia there will slowly appear two balancing blocs. One of them will be backed up by the US within the framework of offshore balancing (which we’ll explain later). Though the nearest future may be unstable, there is a high probability of keeping peace, even if China’s ambitions are growing. 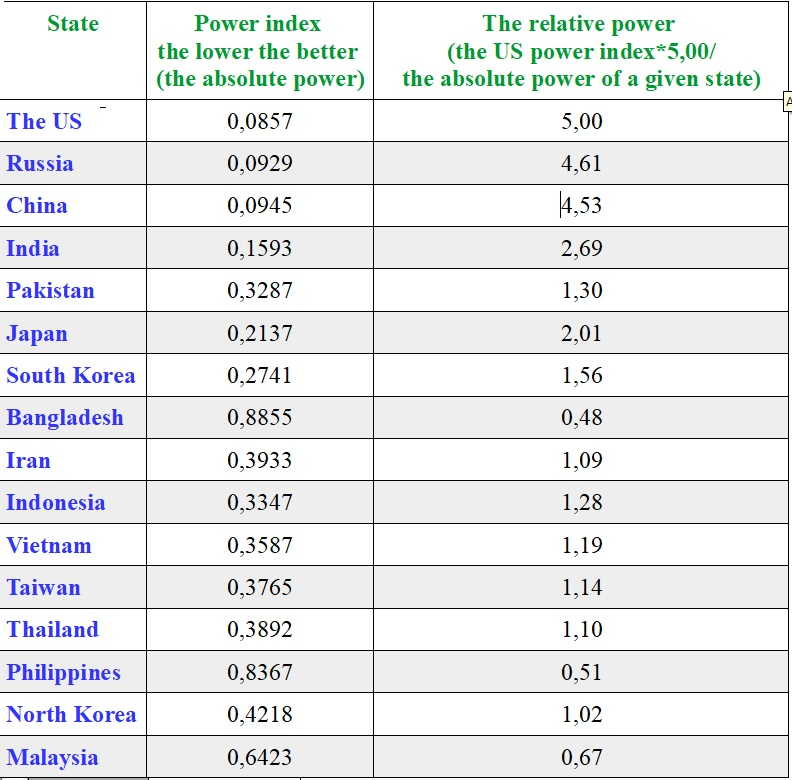 Because of the US limited involvement and only partial support for the allies, we are witnessing the creation of two balancing blocs with similar relative power. The US remains an important actor in the region as it can tip the scale in favor of a bloc led by India.

China: on the road for regional hegemony?
In 2017 the commentators looked closely at the Sino-Pakistan cooperation. Beijing struck a deal with Islamabad over a 40-year lease on the port of Gwadar. As it is situated in the Gulf of Oman, it remains strategic considering the transport of Middle Eastern oil. We should remember that 40% of world oil is shipped through the Strait of Ormuz. Thanks to the deal, China created “the economic corridor”.1)What’s Happening at Pakistan’s Gwadar Port?, The Diplomat 2017-06-17.As a result, the PRC has secured its energy interests and prepared the foundations for further growth. It’s becoming an important actor in the Middle East and it can compete with the US in this region. It’s also possible that the port will be used for military purposes.2)Pakistan’s Gwadar Port a Possible Future Chinese Military Base Location: Pentagon, DefenseWorld.net 2017-06-07.India has been surrounded and the Chinese navy will be able to project its power in the Indian Ocean.

Pakistan considers the deal as a part of diplomacy aiming at finding the new “patron” state that would replace the US. It’s even more important as there’s rapprochement between Washington and New Delhi. Russia is an alternative, but it seems more rational to become friends with the enemy of India. China’s reaction in case of conflict may be considered by Islamabad as potentially more resolute.

China’s presence may be disturbing for the Middle East. That’s why Beijing tries to gain allies in this region. We’re talking mainly about Iran, which was a party to the agreement signed in November 2016 over military cooperation with a focus on joint exercises and counter-terrorism policies.3)Iran and China Are Strengthening Their Military Ties, The Washington Institute for Near East Policy 2016-11-26.It’s possible that the cooperation between Iran, which is coping with sanctions, and China, which is its main economic and possibly also a military partner, will grow steadily. Tehran does might have many alternatives and collaboration with Beijing may help in achieving the status of a regional power.4)The U.S. is Pushing Iran Toward China, Atlantic Council 2017-01-25.Such a statement seems to be valid in the light of the constant discussion about Iran’s membership in the Shanghai Cooperation Organization.5)China says Iran membership of Shanghai security bloc to be discussed at summit, Reuters 2017-06-05.The Port of Gwadar is useful in forming positive bilateral relations.

China is still a “patron” of North Korea and is becoming friends with the states in South-East Asia. After the relations with Washington cooled down, Thailand became interested in cooperation with China, especially in arms industry.6)Is Thailand Now Buying More Arms From China?, The Diplomat 2017-06-14.Also the Philippines profit from the power’s military support while dealing with the Marawi crisis.7)The Truth About China’s New Military Aid to the Philippines, The Diplomat 2017-06-30.Then, Malaysia tightened relations with China in the field of security. The countries formed the cooperation forum focusing on the maritime security.8)What’s Behind The New China-Malaysia Defense Committee?, The Diplomat 2017-04-25.

China is proactive when it comes to attaining the status of a regional hegemon. Its policy is facilitated by the American decision to limit the superpower’s presence. At the same time the growth of Beijing’s influence is alarming for India, which is trying to gain allies in the region to counter the Chinese threat.

India: in search of new allies
The US-India relations are very close. It doesn’t mean that America will be interested in engaging in potential conflicts in Asia with its full strength. That’s why India is searching for other friends, which will be happy to help in balancing the Chinese capabilities.

In April it signed an agreement with another American ally, i.e. South Korea. According to the bilateral deal the two states will produce warships jointly.9)India, South Korea sign agreement to build warships, DefenseNews.com 2017-04-21.Some time later a cooperation defence arrangement with Japan, which is also fearing the changes in the balance of power, has been accepted.10)India, Japan to Deepen Defense Cooperation, The Diplomat 2017-05-10.Several contracts in the same field were also signed with Bangladesh. Some politicians were unhappy about it as they considered maintaining close ties with China to be of vital interest to Dhaka.11)Many in Bangladesh Oppose Proposed Defense Pact With India, Voice of America 2017-04-06.The issue of maritime security was important for the India-Indonesia rapprochement. The two countries are going to focus on the military know-how exchange.12)The Future of India-Indonesia Defense Ties, The Diplomat 2017-02-10.Beijing is worried about the India-Vietnam cooperation, which enables Hanoi to get access to Akash surface-to-air missiles.13)China the elephant in the room as Vietnam and India draw closer in defence cooperation, South China Morning Post 2017-01-18.Finally, China is angry about India deepening relations with Taiwan. Not only did a Taiwan parliamentary delegation visit India,14)Where Is India on the One China Policy?, The Diplomat 2017-03-06.but also both countries signed an agreement on the cooperation between their ICT companies.15)Taiwan India cooperation forum debuts, Taiwan News 2017-06-06.

Those examples may show that India is trying to create an alternative alliance. It’s rational, considering the fears related to the potential limitation of American support.

Russia: preparing for every possible scenario
The image wouldn’t be complete without Russia, which is just as much important as China and India. It has its own sphere of influence, i.e. the former soviet republics, and it is in fact a third pole in the region. It’s also in a very comfortable situation. Moscow is trying to be as friendly as possible with all other parties. As a result, it is possible for Russia to adapt to the changing environment. In case of conflict it may support one of the sides (a realist would suggest the stronger one) or remain neutral.

Many in the West consider Russia to be revisionist. Yet, it’s simply a power, which is interested in sustaining its global position. The attempts to make Ukraine or Georgia a part of Western alliances had to meet a resolute action. In other words, Russia isn’t fighting for a change in global balance of power but for its preservation.

The United States: a new strategy and a turn towards offshore balancing?
The new balance of power in Asia doesn’t mean that the US will withdraw completely. It is possible, however, that Donald Trump will be interested in making India and other allies more responsible for maintaining the region’s stability.

So called, offshore balancing means that the US will be able to retain its superpower status only if the allied powers in different regions will be supportive. It means that in order to balance Russia, European NATO states must become more active. Maybe that’s why Trump stressed that the allies have to pay more for their security.18)Trump on NATO funding: Still misleading after months of fact checks, The Washington Post 2017-05-31.The policy based on the awareness of one’s limitations and the need of burden-sharing seems to be realistic.

What is different about President Trump is the transaction-like attitude towards security policy. However, it doesn’t have to be perceived as a flaw. Washington becomes conscious that the US is able to act as a “world’s sheriff” only to a certain extent. Security is considered to be dependent on the efficiency of the whole network of alliances.

The future of Asia: war or peace?
Though China may be associated with a moderate revisionism, we can hope for peace. Tripolar systems tend to be unstable, yet it depends on the alliance configuration and the power distribution. The analysis shows that the most powerful is the bloc led by India, which additionally may be supported in a limited way by the US. China with its allies is second. Russia, though strong, remains relatively the weakest. Such an arrangement makes war unlikely as it is not to anyone’s advantage. To win the conflict it would be necessary to create a coalition between two of the poles. However, if the enemy was destroyed, the system would become bipolar and one of the winning allies would eventually operate in a system dominated by the stronger one and be forced to rely on the hegemon. No matter who the victor might be, the domination of one state would appear, which is in no one’s interest.

To sum up, Asia is about to face a period of tensions, alliance creation and power displays. It, however, seems that eventually the new order will appear and the peace shall be kept. And it will take place even if the US limits its influence significantly.