A change in demographic trends takes 50 years before they become plainly visible. The decline in fertility in the sixties started to become visible after 50 years. Cerberus, our population simulator, shows with scientific precision that the replacement of the European society has started, and within 50 years it will be visible and irreversible.

Since the seventies of the previous century, the Western societies have not produced enough offspring to keep their communities growing. The fertility rate (i.e. the average number of children per woman) is far below 2.1. i.e. the level of replacement. A population with a higher rate will grow while a population with a lower rate will shrink. As it is, the Western and Japanese societies will begin to implode 40 years from the moment their fertility rate dropped, and this demographic winter, as this phenomenon is sometimes called, will affect the world more profoundly than the climate change, so politicians and investors should take notice.

According to official state data the Swedish, French and Dutch populations will keep growing for the foreseeable future despite their low fertility rates. Western politicians seem to be taking great pleasure in the population decline in Russia, but shouldn’t they first bother about their own turf? How e.g. is it possible that the number of residents in the Netherlands keeps growing if the number of the newborns is smaller and smaller?

To get an insight into the European situation the Gefira team developed Cerberus 2.0, a software tool that, using copious amounts of demographic data provided by the Central Bureau of Statistics, simulates the population development.

Cerberus, making use of the CBS Dutch Central Bureau of Statistics data, calculates how many people died and were born for every consecutive year from 1950 till 2100 and then creates a hypothetical Dutch population growth model without migration. This model overlaps with the official data up to 1980 (blue line in Figure 1 below). In the sixties, the Netherlands had an emigration surplus, i.e. more people left the country than arrived, while in the seventies the so-called mass immigration set in and the process was reversed. A couple of years of immigration has no visible effect, which is why many immigration advocates argue that 50.000 arrivals against a population of 14 million, (i.e. 0.3 percent) is negligible. This is only true if it is a one-time event. If it happens year after year, it brings about a structural change of a population.

The cumulative effect of immigration became visible in the data after 10 years in 1980. The total population in the Netherlands grew according to the official CBS data (green line) much faster than the native population calculated by Cerberus (blue line). The native Dutch population reached a peak around 2015 at 15 million people, while the total number of inhabitants according to the CBS was 17 million and growing. The Dutch society will stay more or less stable with 18 million until 2060, the final year of the CBS projection. Cerberus on the other hand shows that in 2015 the Dutch population started to decline rapidly and in 2060 there will be 12 million Dutch left while at the end of the century there will only be 9 million native Dutch. The Dutch natives will become a minority. Due to demographic inertia it takes a long period before changes in fertility and migration are felt. We remind the reader that the Dutch fertility rate started to drop in the sixties and went below the point of replacement in 1973. Since then it will have taken more than 42 years before the Dutch native population starts to decline. The inevitable replacement of the people of Europe at the end of this century is already set in motion and we believe that after 2030 this process is irreversible.

We use Cerberus to calculate how many migrants are needed to keep the Dutch population stable at 18 million. We input into Cerberus the 1950 population and, starting in 1971, added 15%, 20% and 25% immigration-related growth. Our model showed that the population stabilized with a 25% extra growth, that is about 45 thousand immigrants annually, around 18 million people, which overlaps with the CBS projection

Cerberus proves that the Netherlands needs 45 thousand immigrants to meet the official projections of the CBS. The CBS data is the basis for governmental planning. The Dutch planners keep the mass-immigration unchanged for the foreseeable future instead of anticipating a sharp drop in population. Apparently, the Dutch establishment opts for the replacement of the Dutch society. 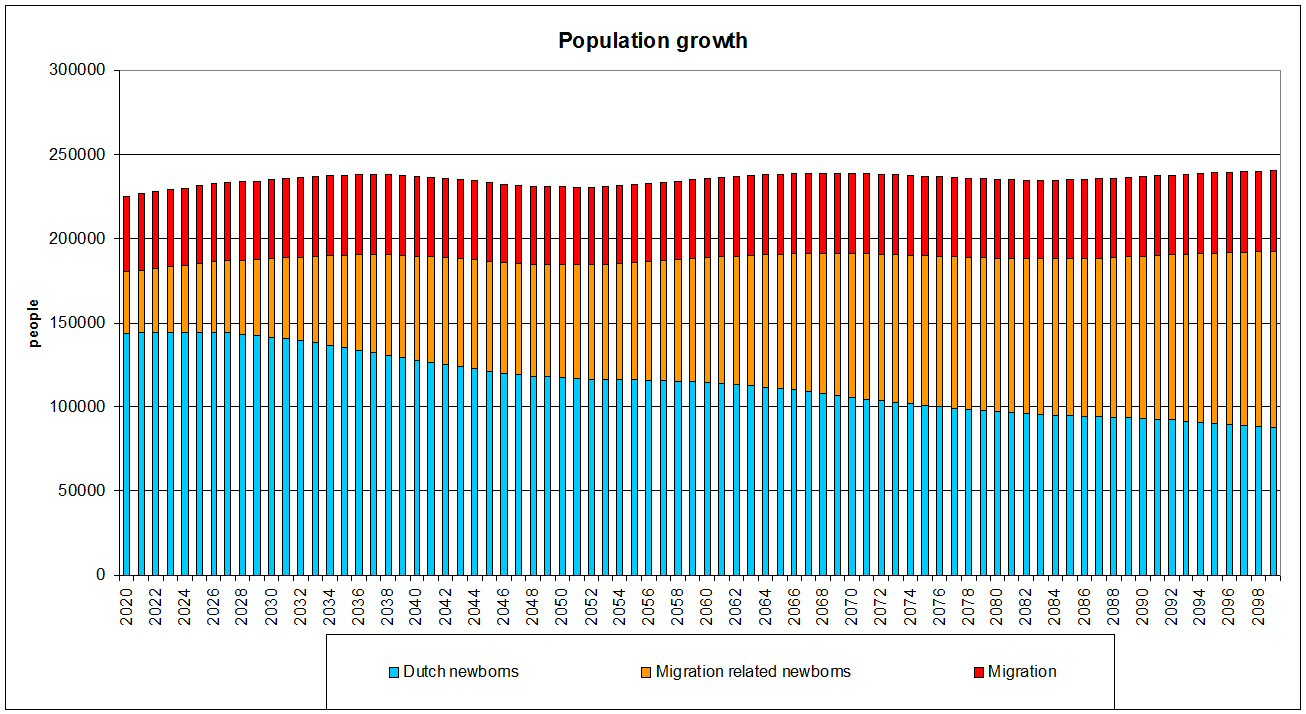 To perceive the consequence of the continuation of mass-immigration, one has to take a closer look at the population growth. When more immigrant children are born than those of Dutch natives the effect is not immediately visible, migrants will still be a minority of the total population but inevitably the Dutch will become a minority within that generation. To see how the growth of the Dutch population evolves we divided it into three components:

These components are shown in Figure 2.

In 2060 50% of the growth in the Netherlands will be non-Western newborns (orange) and immigrants (red), and around 2070 50% of all newborns (orange) are non-native Dutch. From there it takes a further 25 years before the natives are a minority. The Cerberus projections are very optimistic as they assume the native fertility rate at 1.66. According to our separate calculation the real current native-Dutch fertility rate is much lower and close to 1.5. Cerberus shows that the next decades are crucial for the survival of the Dutch population. In 2060 we will cross the Rubicon and reach the point of no return, the Dutch will be inevitably replaced with a non-Western society. But in 2035, 17 years from now, the total growth of the non-Dutch population in the Netherlands will already be a shocking 42%. Measures to increase the fertility are rather counterproductive and will probably only increase the fertility rate of non-Western immigrants. It is said that in the seventies and eighties immigrant families with 6 kids were able to live on the child benefit.

Since the demographic decline is observable in all Western countries, we are in for Europeans being gradually replaced by peoples from Africa or South Asia. We are now at the eleventh hour and if we do not put an immediate stop to all immigration, the Dutch society will vanish into thin air.

The paid subscription version of Gefira explains the consequences of the massive demographic changes in the world for politicians and investors.