Western Europe due to an enormous influx of the Third-World people that has continued for decades is now a multicultural society. The Old Continent’s establishment wants to change the ethnic composition even more and makes no bones about it.1)Vizepräsident der EU-Kommission: „Monokulturelle Staaten ausradieren!“, YouTube 2016-05-04.

If we are told diversity is great, we may accept this proposition or dismiss it, but then we need to make an informed choice. Unfortunately, this question is highly emotionally laden and rather than look for facts, face them and then act on them, people generally shut their reasoning off and rely on wishful thinking from a never-never land. Problems can only be solved when accurately diagnosed or else we are doomed to grope in the dark and waste time and resources in an attempt to cure the social ills with an inadequate medicament; for inadequate it must be if it does not correspond to the disease at hand.

If we, Europeans, fall for the idea of being enriched by diversity, we must know what diversity really stands for. In order to learn what it stands for, we do not need to do social experiments: they have already been done in a variety of places in the world and throughout history. The United States is one good example as it is a multinational, multiracial country with a long history of integration, assimilation, and immigration. All we need to do is to learn from the experience of others. Only then can we make a decision whether or not we wish to follow in their footsteps.

Crime rates are one of the litmus tests whether or not a nation is healthy. The fact is that cohesive and prosperous societies have a low crime rate. Still, in the Western world nowadays it is generally not allowed to deal with the relation between ethnicity and crime. In 1987 a civil servant of the Amsterdam municipality mentioned that Moroccan youth delinquency was quite out of proportion to the percentage of that ethnicity in society. Many demanded his resignation, claiming his observations were racist. Still, the statistical evidence is too compelling to be ignored.

In Detroit, where blacks make up almost 83% of the population and whites 11%, 137 out of 100 000 residents have fallen victim to violent crime; in Naperville, where blacks make up some 3%, whereas whites 82%, only 77 people fell victim to violent crime, i.e. the violent crime rate here is 28 (twenty-eight) times smaller. In Oakland, where the racial make-up is almost evenly distributed (Blacks 34%, Hispanics 25%, Whites 35% and Asians 17%) the violent crime rate amounts to 683 victims per 100 000, i.e. it is 22 times higher than that in the homogeneously white Naperville. The table below shows the correlation of the crime rate with the racial make-up for the top most safe and most dangerous US cities.

As can be seen, safety rises in proportion to the homogeneity and whiteness of the city. Conversely, a large percentage of Blacks or Hispanics contributes to the city’s high crime rate.

That’s the United States, the world’s well-known melting pot, where blacks have been part of American society since inception and have had more than enough time to integrate.

Arguments attempting to explain black social misbehaviour by constant pointing to slavery, which ended over 150 years, i.e. 6 generations ago are problematic and fail to account for the high Hispanics crime rate. In Europe we do not put the blame for our present failures on past injustices. Many social justice warriors blame the phenomenon on white racism and argue that it is the whites, especially white males, who prevent the Africans from becoming law obedient well-developed citizens. There are also those who believe the observed misconduct can be put down to sociological factors and so maintain that with some extra effort put in social security and education the crime rate can be reduced. Others understand that social factors do not lend themselves to easy changes. They argue that the behaviour of ethnic groups, the difference in social norms and values in combination with the dominance of the white group prevent social mobility of ethnic groups.

Still others argue that the higher crime rate is related to biological factors, however politically controversial such an explanation is. Commentators who looked at the problem from a biological perspective saw their career ending abruptly. James Watson, a Nobel prize winner in Medicine remarked once that Africans did not have the intelligence comparable to that of Europeans, which made him instantly a pariah of academic community. Readers who are interested in these ideas should read “IQ and the Wealth of Nations” by Richard Lynn and Tatu Vanhanen, “Race Differences in Intelligence: An Evolutionary Analysis” by Richard Lynn, “Race, Evolution, and Behavior” by Philippe Rushton, “The Bell Curve” by Charles Murray and Richard Herrnstein. These authors have dared to challenge the taboos foisted on Western societies, and dealt with human biological diversity in terms of the relationship that holds between race and intelligence. They have argued that (i) races differ in intelligence, psyche and character; (ii) intelligence, psyche and character are to a larger degree heritable; and (iii) intelligence, psyche and character coupled with other biological variables like hormone levels account for human behaviour to such a regular extent that the percentage of anti-social behaviour, prolonged unemployment, duration and incidence of incarceration, illegitimacy, divorce rate, parsimony, delayed gratification, sexual behaviour (incidence of pre- and extramarital liaisons, unwanted pregnancies, sexually transmitted diseases), school dropout rate and many others can be predicted by race.

The homicide rate (number of murders per 100 000 residents per year) is the lowest (< 2,99) in white, relatively homogeneous European nations (Canada, Australia and New Zealand as extensions of Europe included) and in China, Korea and Japan, where the average IQ is the highest and the society is more developed.

While Honduras is 90% mestizo and Venezuela is 65% mestizo and 10% black, Chile with a homicide rate of 3,6 (17 times smaller than that of Venezuela and 21 times smaller than that of Honduras) is 53% white. South Africa is 79% black and with a significant minority of Whites and Indian people is racially the most diverse country in sub-Saharan Africa.

Of the sixty world’s most dangerous cities (cities with the highest crime index) there are none European, but a number of US with a high percentage of blacks. 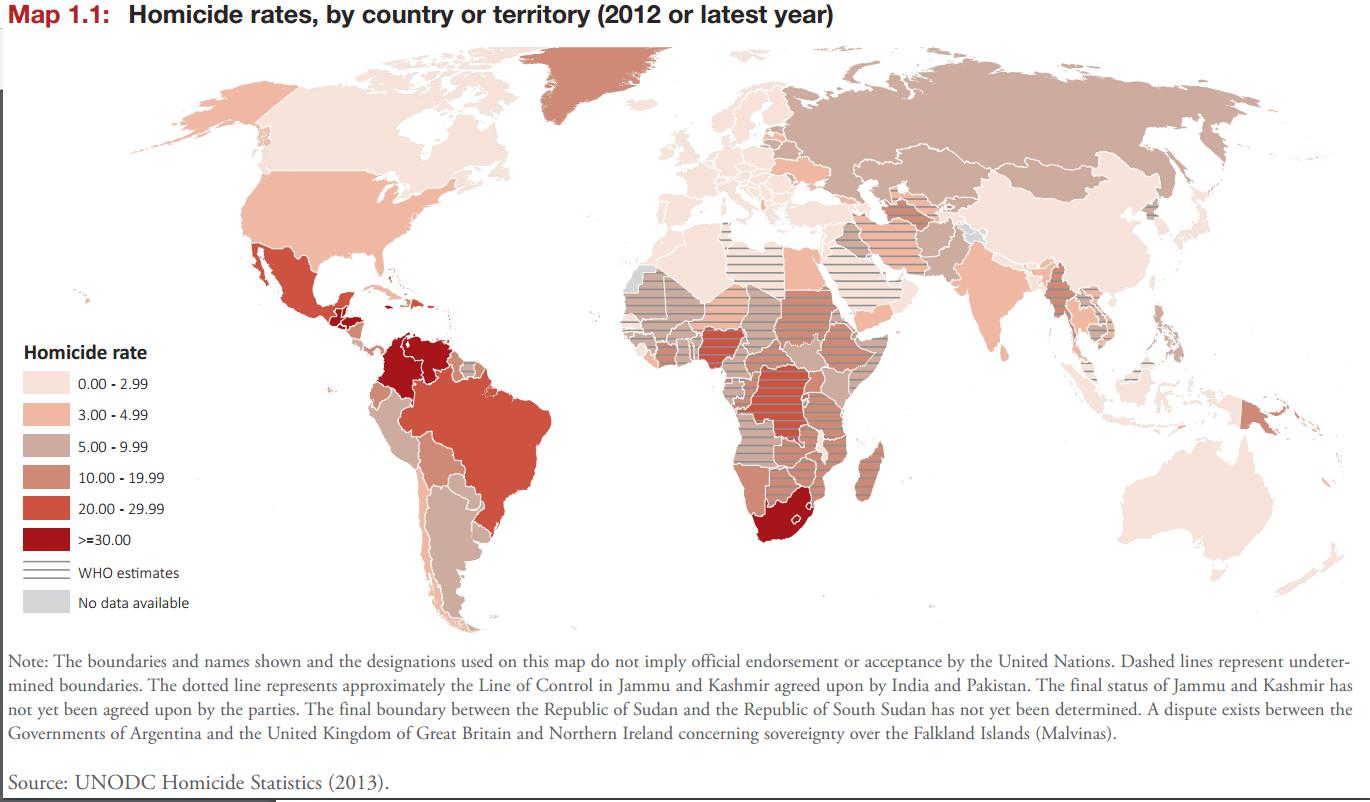 Violence and crime are parts of a gamut of antisocial personality disorders which, according to the 1994 diagnostic manual issued the American Psychiatric Association, include “(1) inability to sustain consistent work behavior; (2) failure to conform to social norms with respect to lawful behavior [this is a euphemism for being a criminal]; (3) irritability and aggressivity, as indicated by frequent physical fights and assaults; (4) repeated failure to honor financial obligations; (5) failure to plan ahead or impulsivity; (6) no regard for truth, as indicated by repeated lying, use of aliases, or “conning” others; (7) recklessness regarding one’s own or others’ personal safety, as indicated by driving while intoxicated or recurrent speeding; (8) inability to function as a responsible parent; (9) failure to sustain a monogamous relationship for more than one year; (10) lacking remorse; (11) the presence of conduct disorder in childhood.”

The United States has been a historical testing ground for creating a diverse society. Over the last few decades it is the European continent that today’s social engineers have set their sights on: they are busy ethnically diversifying European nations and propagandizing Europeans into believing this will bring about enrichment.

In Germany, even “before the great migration of 2015, immigrants – accounting for less than 10% of the population – were responsible for 18% of rapes and 30% of murders;6)Immigrant Crime Rates in Germany, The Unz Review 2016-02-19.“Foreign nationals are thought to account for around 11 or 12 per cent of the total population of Germany, but were over-represented in every area of crime. Amongst total offences, non-Germans accounted for 27.6 percent while illegal immigrants and asylum seekers accounted for 5.7 percent. Of homicides, the figures are 29.3%/8.2%, and of sexual assaults, the figures were 20.5%/4.8%. […] Non-Germans accounted for 38 per cent of all robberies, 38 per cent of thefts, and 43 per cent of thefts that involved a level of aggravation such as assault or force. […] They accounted for 40.2 per cent of burglaries, 43.5 per cent of shoplifting, and a whopping 75.7 of pick pocketing or purse snatching.”7)REPORT: Migrants Committing Disproportionately High Crime In Germany While Media And Govt Focus on ‘Far Right’ Thought Crimes, Breitbart 2016-05-23.Whereas France’s Muslims make up 8% of the French public, they account for 70% of France’s prison population.8)What is going wrong in France’s prisons? The Telegraph 2017-04-22.

The social engineers made by the European Establishment have not asked the Europeans whether or not they would like to live in a Europe-cum-Third-World. Nicholas Pringle has. To his question addressed to the Second World War veterans, ‘Are you happy with how your country has turned out?’ they all gave a resounding no. Why? Because they “despise what has become of the Britain they once fought to save. It’s not [their] country any more. […] Immigration tops the list of complaints. ‘People come here, get everything they ask, for free, laughing at our expense,’ was a typical observation. ‘We old people struggle on pensions, not knowing how to make ends meet. If I had my time again, would we fight as before? Need you ask?’

“Many [of them] are bewildered and overwhelmed by a multicultural Britain that, they say bitterly, they were never consulted about nor feel comfortable with. ‘Our country has been given away to foreigners while we, the generation who fought for freedom, are having to sell our homes for care and are being refused medical services because incomers come first.’” A widow said, “’It is 18 years since I lost [my husband] and as I look around parts of Birmingham today you would never know you were in England. […] He would have hated it.’”9)‘This isn’t the Britain we fought for,’ say the ‘unknown warriors’ of WWI, Mail Online 2009-11-21.Nicholas Pringle interviewed the best judges of the current situation: British veterans, people who have lived long enough to be able to compare the life in a homogeneous country with that immersed in diversity. Younger generations do not have this perspective. They do not know what they have lost or been robbed of.