The People’s Republic has 2,8 million troops at its disposal i.e. the world’s largest army. There are also 3,8 million reservists. For years China has been investing billions in its armed forces: in 2016 it was 216 billion dollars.1)Ranking der 15 Länder mit den weltweit höchsten Militärausgaben im Jahr 2015, de.statista.com.Only the United States can afford to spend more on armaments. The task that China has set itself is to be able to win regional wars, for China is in conflict with many of its neighbours.

A bone of contention in the high mountains
In July 2016 China’s ground forces encroached upon Indian territory,2)China marschiert über die indische Grenze ein – Indien reagiert mit Langmut, Epoch Time 28-07-2016.which was not an isolated event since the 1960 war on the Indian-Chinese border or rather a demarcation line that had been drawn by the withdrawing British Empire. As in 2005, India entered into a nuclear agreement with the United States, China perceived it as a hostile act. On the other hand India did not like the fact that China leased a whole island from the Maldives, where it intended to build a port for nuclear-powered submarines.3)Geheime Basis für Atom-U-Boote entdeckt, Spiegel Online 02-05-2008.The border conflict at the foot of the Karakorum should be seen as a part of a broader picture: Pakistan, India’s ally, has been battling against India in Kashmir for years.

Enemies of long standing in the West
In August 2016 Chinese ships entered Japanese territorial waters,4)Schiffe vor Inseln: Japan bestellt Chinas Botschafter ein, Augsburger Allgemeine, 09-08-2016.close to the Senkaku Isles, which between 1895 and 1945 had been administered by Japan, and in 1972 were returned to Japan by the US and became a part of the Okinawa prefecture. China claims that the islands belong to Toucheng City, Yilan province, in Taiwan. Just like the dispute over territorial waters between China and South Korea, what is at stake are not merely important strategic positions, but also rich fisheries. South Korea has strengthened its air and naval forces due to constant Chinese provocations and installed on its territory the US THAAD anti-ballistic missile system.5)Dieser Golfplatz bringt China in Rage, Spiegel Online, 01-03-2017.

The fuse in the South China Sea is set
There Beijing is constructing a wall of sand and rock, this time against the United States and its allies. 1.000 miles off the Chinese coast the Chinese are building artificial islands as military bases for military operations. New landing areas and runways are created, all serving strategic purposes. The People’s Republic perceives itself to be surrounded by two island chains. One stretches itself from Japan through the Philippines down to Indonesia, the other from the Aleutian Islands to Guam, one of the Marianas. These belong to either United States allies or, like Guam, are a part of America. The artificial islands are created in response to a prolonged dispute with a number of Asiatic countries over Spratly and Paracel Islands. 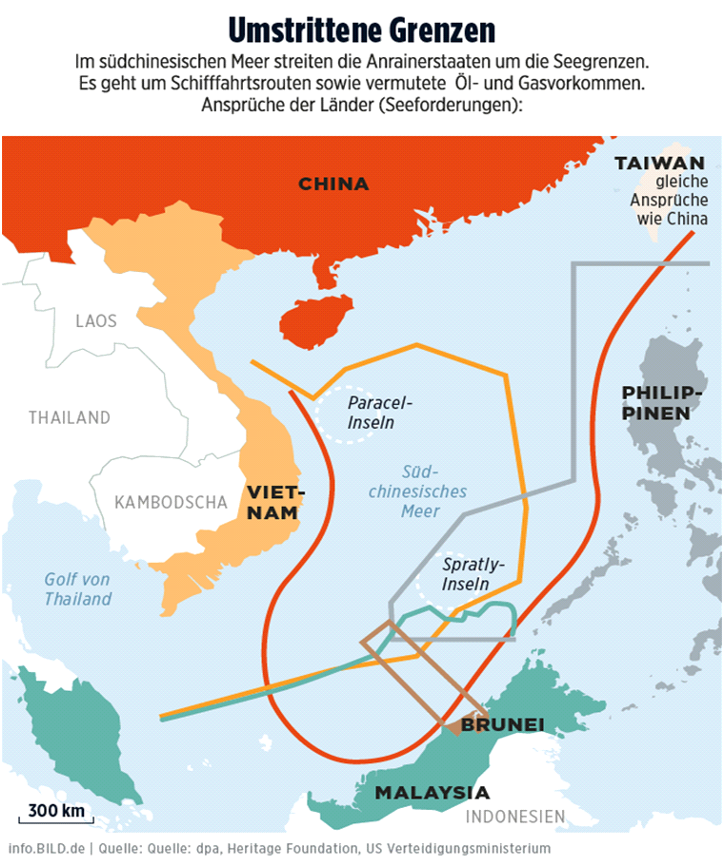 China claims possession of 80% of the South China Sea. In June 2016 the Hague International Court made an ineffective ruling against China, which Beijing ignored because it cannot be enforced by any means. It was the Philippines that filed a complaint after Chinese fisher boats poaching in its territorial waters had been intercepted. The area between Vietnam and the Philippines is said to be the world’s largest salmon breeding grounds. Of course no one will wage a war over fisheries. It is the trade routes and resources that matter. Here, in the China Seas, the territorial waters of six countries (Malaysia, Brunei, Vietnam, Taiwan, the Philippines and China) overlap partly. The sea is one of the world’s most important trade routes: goods worth $5,3 billion are transported that way.

The sea bottom is believed to contain crude oil and gas as well as rare earth elements. According to the China National Offshore Oil Corporation there are 14 billion cubic meters of gas under the bottom of the South China Sea.6)China Sea Oil and Gas Resources, China Institute of International Studies, 11-05-2015.No wonder then that the People’s Republic seeks to lay its hands on such important resources.

„An armed conflict is a highly likely scenario,“
said Liu Guoshun, a representative of the Chinese Central Military Commission.7)Chinas Militär warnt vor bewaffnetem Konflikt mit USA, Gegefrage.com, 01-02-2017.Sean Spicer, Donald Trump’s spokesman, is one of Washington’s hawks. In January 2017 he said, “The United States will protect international waters from being occupied by any one power.”8)USA wollen Chinas künstliche Inseln stoppe, n-tv 24-01-2017.Chunying Hua, the foreign ministry spokeswoman, responded that Beijing’s sovereignty over the islands was unquestionable. „The United States are no party in the dispute over the South China Sea.”9)China warnt die USA vor Einmischung in Territorialstreit im Südchinesischen Meer, Zeit Online, 24-01-2017.War may break out at any time: in the 21st century it is not merely territory but first of all (undersea) resources that have sparked off armed conflicts. We need to consider the global situation and have a closer look at the existing alliances that have been made also between former enemies. Japan for instance is in league with the countries that it used to occupy during World War Two. Vietnam allies itself with the US and Australia in fear of a Chinese aggression. The war in Syria united China with Russia. Both these countries have the veto right in the United Nations Security Council and hold similar views on Syria; they also held joint military exercises off the Japanese coast and in the Mediterranean. Since 1945 Japan demands that Russia return the Kuril Islands.