It was just 2011 when the Finnish government, one of Greece’s many creditors, demanded that Athens put one of its national symbols, the Parthenon, as collateral for the rescue loans package.1)Finland’s demands for collateral could leave Greek bailout in ruins, The Guardian 2011-08-28.
Fast forward to 2015: while the European Union leaders humiliate the Greek democracy by imposing even harsher austerity measures than the ones previously rejected in a referendum, even despite the fact that the IMF admitted having miscalculated the Keynesian multiplier for Greece and thus completely underestimated the catastrophic consequences of austerity,2)Growth Forecast Errors and Fiscal Multipliers, IMF Working Paper 2013.Finland is no longer part of the group of “virtuous countries”: unlike Greece, its public finances are fine, however the sources of its economic strength, tech colossus Nokia is in a deep crisis,3)Finland: The sick man of Europe? BBC 2016-02-29.unable to keep up in innovation with its competitors, Apple and Samsung. The once national pride of the Finns, accounting at its peak for 20% of the Finnish exports,4)As Goes Nokia, So Goes Finland? Bloomberg 2013-09-03.will end up being overtaken by foreigners (Microsoft). To worsen the conditions of the Finish economy, the EU leaders opted for a trade war against one of Finland’s main trade partners, its neighbor Russia, over the Ukraine crisis.
What happened was something many economists warned about as far back as 1961: in his theory about optimal currency areas, one of the early models for what would become the Eurozone, Robert Mundell cited asymmetric shocks (country specific) as the number one problem of currency unions, warning about the impossibility to control them.5)Mundell , R.A. 1961, “A Theory of Optimum Currency Areas”, American Economic Review n.51, pp. 657-665.
He additionally lists labor mobility across regions, including lack of cultural and linguistic barriers, open capital mobility, price and wage flexibility, regional fiscal transfers to the regions affected by the asymmetric shock and similar business cycles across borders as conditions for the monetary union to continue working, otherwise “Where there is no mobility in the factors of production, asymmetrical shocks could be absorbed by a change in the exchange rate, but for that to occur, the affected regions must each have their own currency.”6)Robert Mundell and the Theoretical Foundation for the European Monetary Union, IMF 1999-12-13.
A quick look at today’s Eurozone would reveal that most of the elements to make the monetary union work are missing: cultural and linguistic barriers prevent labor mobility across regions, regional fiscal transfers (not just loans) are ironically opposed by the very same bloc Finland is part of, as far as similarity of business cycles goes, a 2003 study by the European Commission itself found that “synchronization is higher during periods with more flexible exchange rates and lower when exchange rate volatility is low”,7)How similar are European business cycles? p. 30, 4TH Eurostat and Dg Ecfin Colloquium on Modern Tools for Business Cycle Analysis 2003-10-20/22.meaning it’s better when there’s no common currency, with later studies confirming the absence of an Eurozone business cycle8)Do European business cycles look like one?only open capital mobility is actually there. The Eurozone does not correspond to an “optimal currency area” at all. And according to the economic theory itself, for the shock to be absorbed, Finland must abandon the euro. Only a devaluation of the national currency, reflecting the relative strength of the Finnish economy, can bring respite to Finnish enterprises in the form of a competitive edge.
The rest is obvious: Finland faces stagnating growth, if not outright recession, a collapse of competitiveness,9)How sleepy Finland could tear apart the euro project, The Telegraph 2015-04-18.a trade balance that has shifted from net exporter to net importer and a 9.2% unemployment, which rises to 23% for the Finnish youth.10)Unemployment rate 9.2 per cent in January, Statistics Finland 2017-02-21. 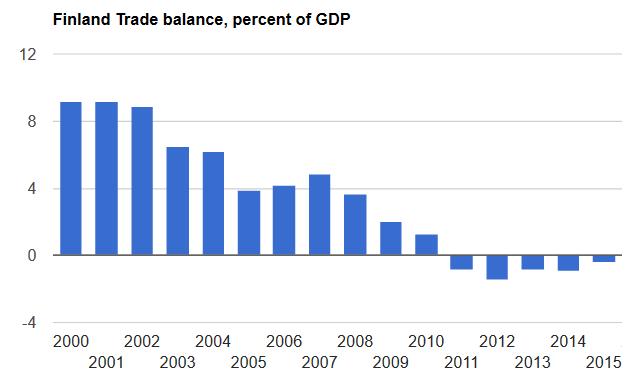 The worsening economic conditions have resulted in a citizen initiative to hold a referendum on the Eeuro membership, which was rejected by a committee of the Finnish parliament.11)Euro referendum initiative thrown out by parliamentary committee, Uutiset 2016-11-25.The attempt might have been thwarted for now, but as Finland continues to struggle, this isn’t likely to be the last time we will hear of it.

Lessons learned:
– asymmetric shocks can hit anyone, there are no “lazy Southerners, virtuous Northerners”;
– being part of the “virtuous group” today doesn’t mean you won’t be the “lazy group” tomorrow;
– the Finns tried to take the Greek national pride, the Parthenon, yet ended up losing their own, Nokia;
– austerity isn’t working in Finland just like it didn’t work anywhere else;
– as economic theory prescribes, if the Eurozone is not an optimal currency area, then the only way to absorb the asymmetric shock is to return to national currencies.