1)Vilfredo Pareto, By Ioannis Arvanitakis (Own work) [CC BY-SA 4.0 (http://creativecommons.org/licenses/by-sa/4.0)], via Wikimedia Commons.Vilfredo Pareto (1848-1923) was an Italian engineer, philosopher, economist, sociologist and political scientist, famous, among other things, for his theories about “the elites”.

In his theory of the “circulation of the elites” he argues that social mobility is fundamental for the peaceful continuity of social order: as long as the elite is open to the influx of capable elements from the lower classes, the system is able to rise up to the challenges it faces. When the elites shut themselves off and do not assimilate exceptional individuals from the lower social strata, an imbalance is created that can result in a violent overthrow of the ruling class by a new one capable of governing.

Drawing on that theory we argue that democratic systems have evolved in a way that an overthrow of the elite can happen without violence, but by democratic vote. Lack of social mobility, says Pareto, results in an elite detached from the daily challenges of the common man and a sense of disenfranchisement of the voters.

Then, utilizing the Intergenerational Social Mobility Index of 2015 by the OECD, 2)Income Inequality, Social Mobility,And Economic Growth, Nero Conference Paris 22 June 2015.we look at the 2016 events in an attempt to see if the Western elites’ ability to survive has anything to do with the social mobility of each country. 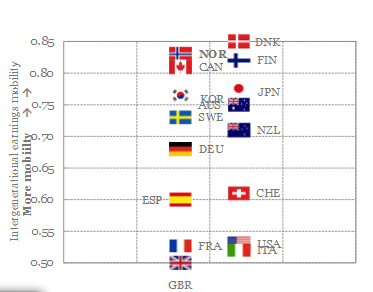 In 2016 the developed countries that saw a successful democratic revolt against the elites were:

– the US (presidential election)

3 out of 4 rank at the bottom of social mobility among developed countries. The Netherlands (not in the table) ranks higher in terms of social mobility, and its referendum was the least binding on the elites as it hasn’t produced a change of the governing body yet

The 2017 Dutch elections are likely to see the victory of anti-establishment Geert Wildeers, but he is also not likely to obtain enough votes to form a government alone, thus postponing the replacement of the Dutch governing class. By comparison, Austria, with a higher social mobility than Germany,3)Income Inequality, Social Mobility,And Economic Growth, Nero Conference Paris 22 June 2015.also had a presidential election in 2016, but the elite survived.

France, the 4th of the bottom four, also shows a significant possibility of change of governing body and elite in the presidential elections of 2017. Germany with its higher social mobility is also facing social upheaval and elections in 2017, but the survival of the elite is granted regardless of the success of Merkel or Schultz, while anti-establishment AfD is posed to make major gains, but not yet enough to challenge the status quo.

In conclusion, the cases of the UK, the US and Italy seem to confirm a correlation between a low social mobility and popular revolt against the elite, just like the cases of Austria and Germany seem to confirm that a higher social mobility can help their elites to survive. We await the results of the Dutch and French elections to see if a further correlation is confirmed. If hypothesis is confirmed, Geert Wilders will fail to become the Prime Minister of the Netherlands (though it can be argued it’ll be partly out of the proportional electoral system); Marine Le Pen however, will succeed.