If a 4.5 million nation is the third biggest foreign holder of US Treasury securities, the biggest in the European Union, it is something remarkable. If a 0.5 million nation is the second EU-holder of US papers, it is something striking. Ireland and Luxembourg, as well as the United Kingdom and Belgium, are used by the international financiers of foreign powers to credit or cheat the US government who pays them interest for avoiding taxes in their home-country.

It is widely known that Japan and China are the two biggest holders of US government bonds. But these countries have huge savings and their investments over $1 trillion have fundamentals. Meanwhile, the EU holdings (altogether bigger than those of Japan or China) are pumped up by financial institutions, including US financiers and companies. In other words, European holdings stem from loose tax rules rather than strong economic demand for securities. 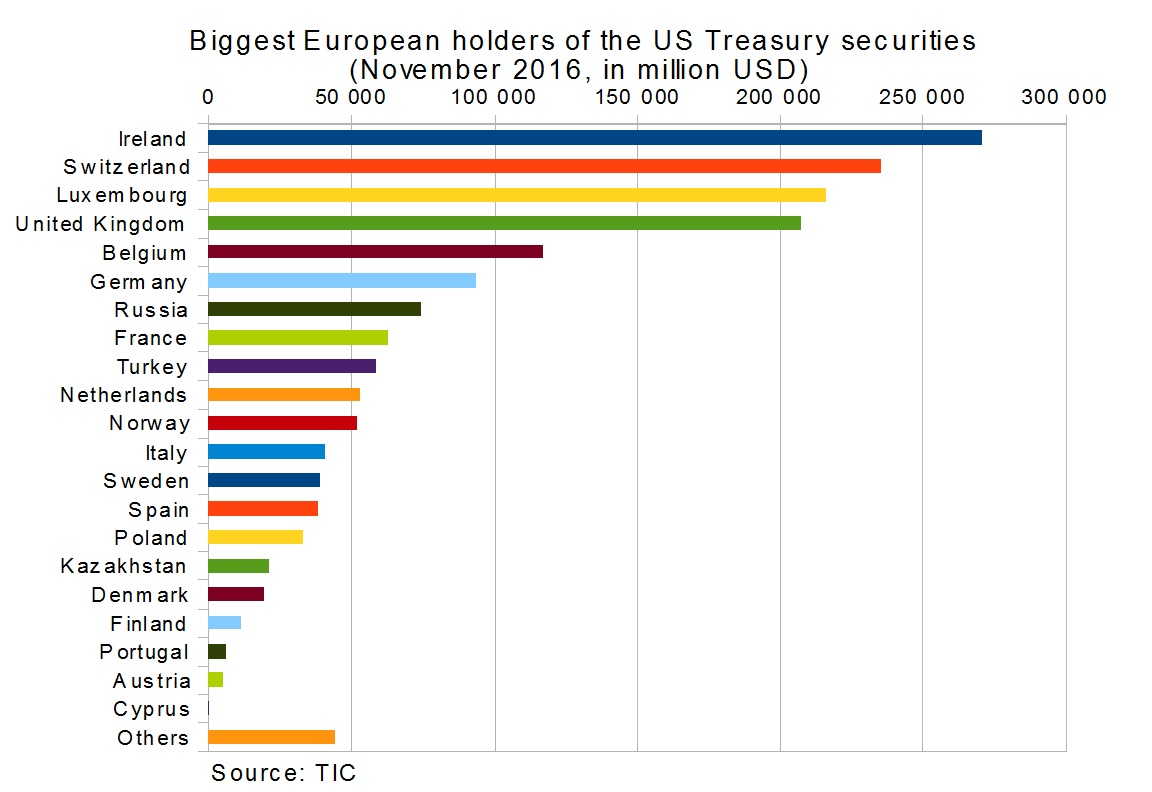 Ireland, Luxembourg, the United Kingdom and Belgium taken together make up two-thirds (66%) of the entire EU’s US Treasury securities holdings. The biggest European countries with a potentially enormous share of savings, Germany and France combined, have $156 billion of US papers, which is still less than Irish or British holdings.

The obvious reason is tax optimization allowed by the “liberal” Irish, British, and Luxembourgian law. “It’s all just foreign banks, funds and corporates based here,” said Owen Callan, a fixed-income analyst at Cantor Fitzgerald LP in Dublin, for Bloomberg in May 20161)Ireland Stands Out in Treasury Holdings That Exceed Economy, Source: Bloomberg 2016-05-17. “It’s probably linked to offshore mutual funds administered here or offshore-retained earnings of U.S. Multinationals.” As Bloomberg adds, more than 700 U.S. companies are domiciled in Ireland.

For US companies the thing is easy: if they have cash and profit that should be taxed, they hoard the cash overseas and buy US government bonds through Wall Street by means of which not only do they evade taxation but also earn interest from the same US government that they tricked out of the revenue; at the expense of US citizens.

Irish people can also feel fooled as their authorities were proud of leading the country out of the crisis; Ireland was seen as a benchmark for Southern Europe. However, the last year’s 26% GDP growth was a disgrace to economics (the state’s statistics office already announced phasing in a new measure of economic growth: the adjusted gross national income GNI).4)Ireland to phase in new way of measuring economic growth, Source: Reuters 2017-02-03 As Tim Worstall from Forbes Magazine explains, a 26% jump in the Irish GDP seems to have been the effect of Apple unwinding its previous tax and accounting structure in Ireland and replacing it with something else.5)Absolutely Fascinating – Apple’s EU Tax Bill Explains Ireland’s 26% GDP Rise, Source: Forbes 2016-08-16

The liberalization of the economy understood as facilitation for global, i.e. US corporations leads to such quirks like a 26%-jump in GDP or treasuries holdings equal to the entire value of the GDP. Such a degeneration of economics is not only unfair towards people but also poses some threat: the budget deficit can only grow in proportion to the GDP growth. On the other hand, the GDP per capita is bouncing up and down, while common people do not feel any difference. 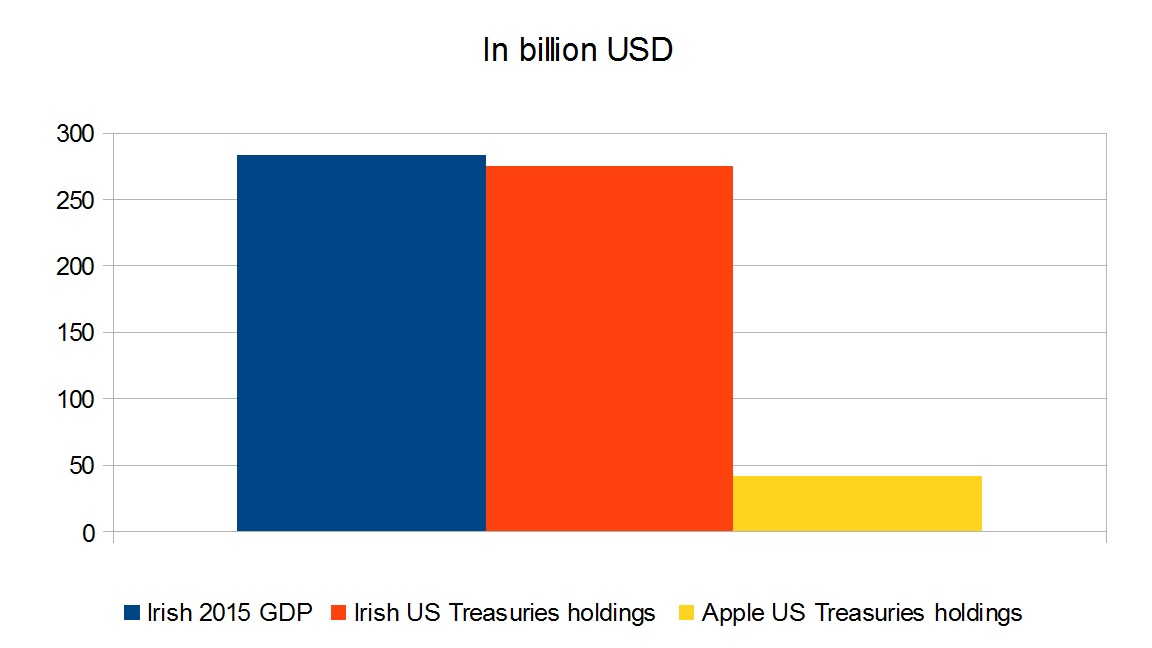 Ireland is not the only example of a European country used by foreign powers for not entirely ethical purposes. As ZeroHedge revealed in 2015, Belgium’s holdings jumped because of a Chinese intervention6)Revealing The Identity Of The Mystery “Belgian” Buyer Of US Treasurys, Source: ZeroHedge 2015-05-18and in the years 2013-2015 the country’s holdings of the US government bonds soared thrice from $150 billion to $350 billion and dropped again below $150 billion.

However, the current holdings of $113.5 billion are still very high, higher than the potential power of the Belgian economy. The reason may be again the US: Johnson&Johnson, an American company, is the second-biggest employer in Belgium with US capital.7)The Importance of US Companies in Belgium, Source: Amcham Belgium 2017 At the same time, Johnson&Johnson is the fourth biggest corporate holder of US treasuries ($14.6 billion). It’s quite possible that American companies in Belgium, like ManpowerGroup, Ford, and Caterpillar use their Belgium’s subsidiaries in the same way Apple uses its Irish one.

The same applies to US companies located in Luxembourg, a European tax haven, to pay less tax. Conceivably, a part of Luxembourg’s holdings of US Treasury securities comes from American corporations purchasing bonds on Wall Street. The US, one of the world’s biggest tax havens, is losing billions of dollars because of this weapon invented and used by its own entrepreneurs. And Europe is only a tool.