A break-up of the eurozone due to the European Central Bank and its Public Sector Purchase Programme (PSPP) should not be treated like a science-fiction scenario. The more government bonds the ECB buys, the smaller becomes the problem of a country’s insolvency and debt conversion into French francs or Greek drachmas. Eventually, who cares if all the bonds are kept by the institution that cannot go bankrupt and that is out of the financial market?

Let us recall: the exclusion of Greece from the Euro Area was impossible in 2012 due to a large amount of Greek debt held by foreign banks, which were rescued by the ECB, the European Union and the International Monetary Fund. These institutions, called Troika, saved banks and private creditors, not the Greeks: 95% of the bailout money went to banks, as a study of the European School of Management and Technology proved.1)Study: Bailouts for Banks, Not Greeks, Source: Handelsblatt 2016-05-04

For Greece the the problem is solved now and Grexit has become possible as more than three-quarters of the Greek debt is in the hands of international bailout funds.2)Greek debt crisis: Who has most to lose?, Source: CNN Money 2015-02-15 In the case of Grexit, the financial system will not collapse because the burden has been imposed on the German, French and Italian taxpayers and the international institutions that can afford to sustain losses made from the Greek debt because their solvency depends on governments, i.e. taxpayers again. 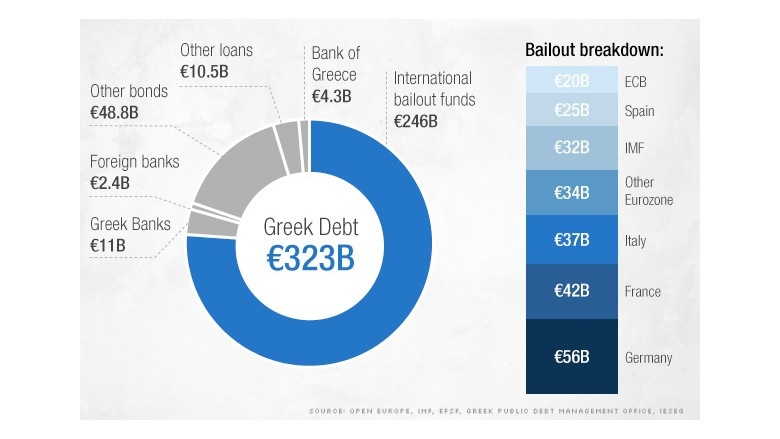 Pulling the Greek debt out of the financial market means that the debt relief is only a political decision. And people like Wolfgang Schäuble, German finance minister, can harass the Greek authorities3)Greece must reform or leave eurozone, says German minister, Source: The Guardian 2016-12-04 with no risk. The burden is spread on millions of citizens, while banks and banking elites will not suffer any more. Solving the problem is now in the hands of politicians.

To limit the financial chaos that is likely to ensue when France, Greece or Italy leave the euro:
1. inter bank exposure across borders should be limited;
2. sovereign debt should be limited to national banks and financial institutions;
3. the European Central Bank should mop up as much debt and liabilities as possible, which will result in litigation or disputes.

France, Italy or Greece will argue that their debts should be converted to the franc, lira, or drachma while the holders of the securities sill insist that they stay in euros. If all these liabilities are held by the ECB, this problem can be solved more easily. This institution can resort to all kinds of tricks such as we saw with the Greek debt. Greek maturities have been extended to 35 years and interest payments have been postponed for 10 years.4)Greek drama takes center stage at IMF meeting, Source: CNBC 2016-04-12

The European Central Bank quantitative easing program is hardly improving the economy in the Eurozone, but at least it is providing the financial stability now that a euro-breakup it a matter of time. (For more information see our Gefira bulletin)

Greece is not a part of the Public Sector Purchase Programme; however, other EA countries’ bonds are being massively bought by the ECB. In the years 2002-2011 less than 2% of the EA’s debt was held by the Central Bank but as soon as the quantitative easing started, the share of the ECB in European bond holders has risen sharply. In the end of 2015 the share of the ECB as a holder of the EA’s government debt soared to 6%, and according to our estimations in 2016 it may be even twice higher or more, as the asset purchase program was expanded. Small countries like Slovakia, Finland, Lithuania or Slovenia could soon find themselves in the hands of the ECB, as 1/5 of their debt is already held by Frankfurt’s ECB. 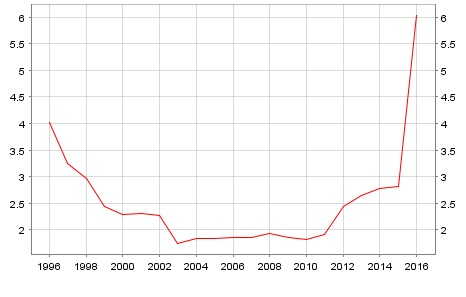 At the same time, the share of other monetary financial institutions, i.e. banks, has dropped below 25%. A further decrease would minimize the risk of a euro collapse for banks. Moreover, the share of residents5)Resident – a person or entity who mainly resides in one region or jurisdiction and has interests in this region. in EA’s debt holdings has increased, which means that most of the bonds can be easily converted to the local currency without big protests from the outside powers.

The public sector purchase programme, the main part of the ECB’s quantitative easing, was introduced in order to decrease the interest rates and help the local economies to rebound. However, the unwitting side effect of Mario Draghi’s policy is that the ECB has been putting itself in a position of being able to exclude a country from the eurozone. With a majority share in a country’s bond-covered debt, Frankfurt can decide which state should stay in the Eurogroup and which can be dismissed without a potential collapse on the financial market.