The events in Syria are changing rapidly. Turkey has entered Syria and is heading for Al-Bab, a city 35 kilometers from Aleppo, according to a Turkey government official and a statement issued by the Turkey-supported Muslim militia united in the FSA (Free Syrian Army).1)New target is western town of al-Bab, 6 km from Syrian army, Source Hurriyet Daily.The next step is lifting the siege of Aleppo from the east. Atatürk became the Father of all Turks after he had won the Battle of Gallipoli and defeated major European powers; Erdoğan will be the father of all Sunni Muslims if he liberates Aleppo and thus gains the upper hand over Russia and Iran.

Russia, the Kurds, and the Syrian army were very close to cutting off the Raqqa-Turkey supply route. Turkey’s invasion is a gift from heaven for the Jihadists in Raqqa: it prevents them from being cut off from Turkey. Turkey’s invasion of Syria is clearly to the advantage of ISIS.

Turkey’s objectives in Syria have always been clear and these are to:

1. prevent the Kurds from gaining autonomy, destroy the YPD, the sister organisation of the PKK, and
2. remove Assad from power.

When the Turks reach Al-Bab, they will be 6 kilometers away from the Syrian army. Operating from Al-Bab, the Turkish army will try to raise the siege of Aleppo. The Turkish-backed Jihadist militia will attack the city from the east while the Russians and Assad’s troops are already struggling in the West to maintain the city blocked. The most obvious strategy is to use Turkey’s proxies, the FSA and Al Nusra Front, which is now re-branded to “Jabhat Fateh al-Sham”. Because the US is sending soldiers2)Around 50 US soldiers arrive in Turkey to use the newly-deployed HIMARS system.to support the Turkish incursion in Syria, it was necessary that this pro-Turkey Jihadist militia pretend to be moderate.  Jabhat Fateh al-Sham discontinued its allegiance with Al Qaeda  and it altered the colours of their flag, with a white background and a black text, to make its image more palatable to the Europeans and Americans. The Turks need Al Nusra and FSA to do the real fighting.

In Al-Bab, the Turkish army will use the Turkish militia alongside the Turkey army to avoid a direct confrontation with the Syrian army. If the Jihadist manage to raise the siege of Aleppo, Turkish tanks will follow them as liberators.

The Iranians, Syrians and Russians do understand Erdoğan’s intention and are now in an extreme hurry to conquer the city of Aleppo.3)600 Russian ground troops land in Syria, Gulf News.There is clear proof  that the Russians and Iranians have a foothold on the ground in Aleppo and both are hastily sending in more troops.4)Блокада боевиков в Алеппо восстановлена /The blockade of terrorists in Aleppo restored, YouTube. 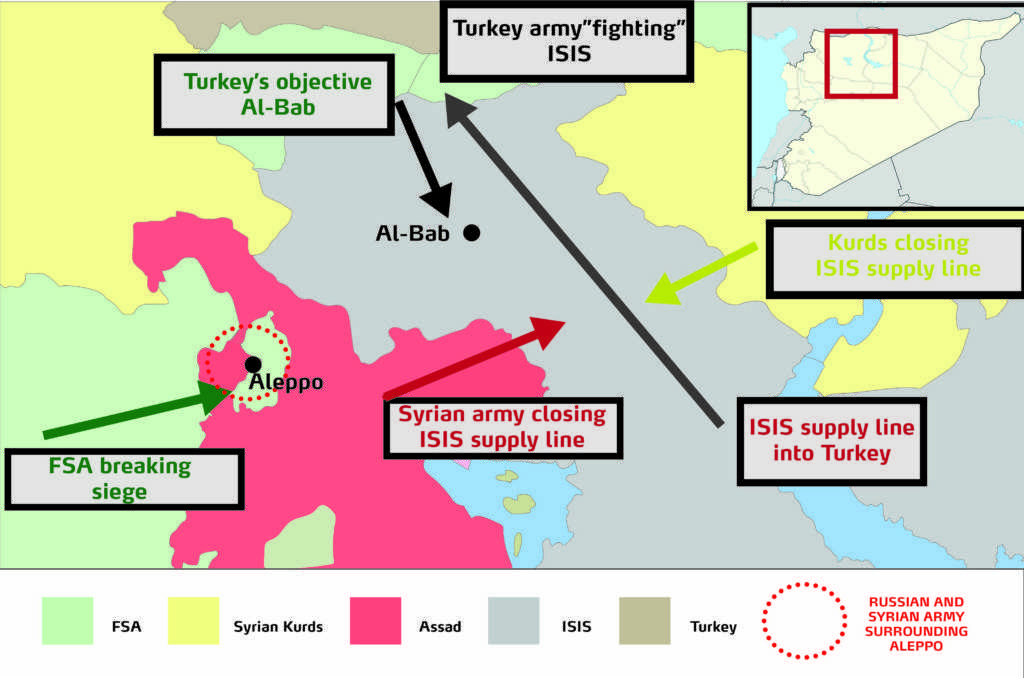 For Erdoğan, the liberation of Aleppo shows great promise. It will establish him as the leader of all Muslims so that he will be able to tout himself as the new Ottoman Sultan, he will not only gain popularity under the Turks but also under the Arabic Sunni population. Not only will he be cheered by Turks in Berlin, London and Amsterdam, but also by Arabs in Paris. The moment Erdoğan triumphs in Aleppo, Muslims will wave Turkish flags in the streets of major European cities. While it is obvious to us that the liberation of Aleppo is not that simple, we think Aleppo is the main goal of his incursion into Syria as the Turkish Foreign Ministry stated clearly: “Turkish foreign ministry says Aleppo siege ‘unacceptable’.”5)Turkish foreign ministry says Aleppo siege ‘unacceptable’, Anadolu Agency.

True, Erdoğan and Putin have met recently, yet no alliance between Turkey and Russia has been forged. Vitaly Churkin, Russia’s Permanent Representative to the United Nations, made clear last Friday that Russia had not given Turkey the green light in the region.6)On Syria, Churkin Says No Russian Green Light For Turkey, YouTube.

Putin is running the risk of being sucked into the Syrian quagmire. If the number of Russian casualties grows and the strategic or political objectives are not achieved, he may lose support at home for his Syrian adventure. Putin’s troops in Aleppo are running the risk of being attacked by the army of his dear friend Erdoğan, and so the Russian president may be stabbed in the back a second time.

With the liberation of Aleppo Turkey will become a new dominant power on its own that has struck a blow against the Russians and humiliated the Europeans. This will enable Ankara to exert influence not only over the Turkish diaspora but also over the Muslim community in Europe.

Putin is smart enough to figure out that Moscow needs to spare its military resources for the next inevitable confrontation with Ankara which will take place either in the Balkans or the Caucasus (more about it in a later post). The European establishment, i.e. the NATO and the intellectual elites, have no clue what they are heading for now Erdoğan is running his own show. As it is, they are staring into the abyss as Europe starts to disintegrate on many fronts.