China is by far the most powerful contestant. Neither the Philippines, nor Malaysia nor Vietnam can compare, though they, especially Hanoi, dare to put up a fight and stave off the encroachment on its sovereignty. China, true, is willing to sit down to the negotiation table, yet insists on bilateral talks; the smaller contestants prefer group talks. An they all look to the United States, if for different reasons. China is trying to expand its regional clout, the smaller countries are defending their rights. And the United States? Failure to respond to the Chinese challenge entails serious consequences such as damage to Washington’s status of the world superpower and loss of American credibility, not only in the eyes of the few South-East Asian nations concerned but also others, like Japan. The eyes of the world are thus focused on the South China Sea.

The South China Sea is a body of water bounded by (clockwise from north) China, Taiwan, the Philippines, Indonesia, Malaysia and Vietnam. The vast aqueous area is strewn with a number of islands that are geographically referred to as Paracels (to the north) and Spratlys (the the south). For centuries nothing much had been happening till in 1947 China laid its claims to this vast body of water and she did it in the form of a map where by means of nine (originally eleven) dashes a roughly delineated area was marked that had allegedly always been Chinese. That its extent overlapped with other countries’ Economic Exclusion Zones did not seem to bother Beijing. 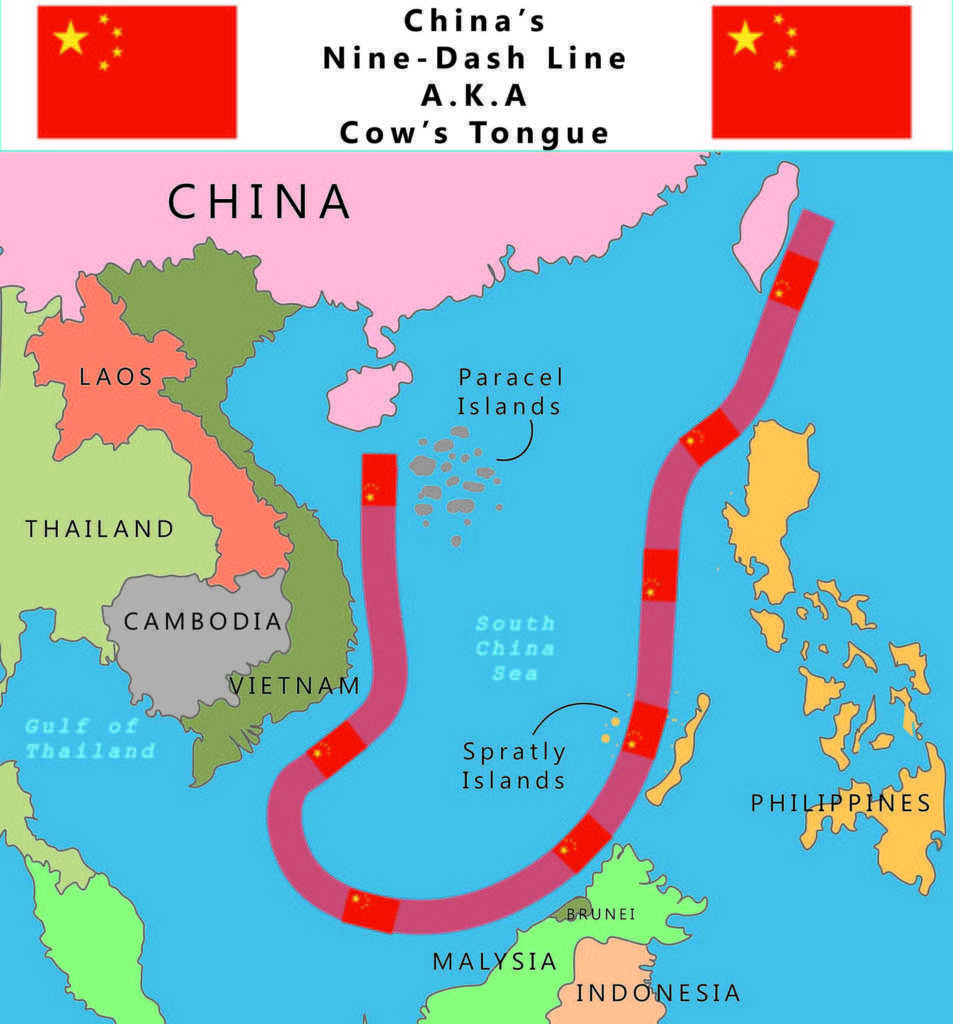 In 1974 and 1988 there were two military clashes between China and Vietnam, with the latter reporting a number of casualties. In 2009 Beijing submitted the case, now known as the nine-dash disputed area, to the United Nations; again Vietnam and this time Malaysia objected. The Philippines (in point of fact the United States1)US lawyer for PH expert in maritime boundary cases, Inquirer.net 2015-07-12.) followed suit and 2013 filed a case with the Permanent Court of Arbitration in the Hague. Beijing refused to participate which rendered the ruling of the tribunal null and void2)Beijing to ignore South China Sea ruling, Bangkok Post 2016-06-04.(for an arbitration to be recognised as binding it justice has to be meted out in the presence of all the parties concerned).3)UN Arbitration Court Rules Against Beijing in South China Sea Dispute, Voice of America 2016-07-12.

Meanwhile the United States is trying to assert its position in the region; it has sent its navy to the South China Sea to, as it was couched, test the freedom of navigation.4)South China Sea: US warship sails near disputed reef, BBC 2016-05-10.After all the disputed body of water is one of the most important world shipping routes and China is gradually developing its military presence there. Beijing creates man-made islands on top of reefs by land reclamation and fits them with airstrips the can accommodate aircraft, which will provide China with a military edge over American aircraft carriers;5)US Pacific Hegemony vs. a Rising China, New Eastern Outlook 2015-10-18.she is considering having drilling oil rigs there.

After the Chinese had developed a surface-to-air missile battery to the Paracel Islands, Admiral Harry Harris, the Pacific Command head, said, “In my opinion China is clearly militarizing the South China Sea. You’d have to believe in a flat Earth to believe otherwise.”6)The U.S. just sent a carrier strike group to confront China, Navy Times 2016-03-04.For the Americans this region constitutes the famed Asian Pivot, an area where American military presence is for Washington a geopolitical requirement, as stated in a an analysis done by the Center for Strategic and International Studies.7)Asia-Pacific Rebalance 2025: Capabilities, Presence, and Partnerships, CSIS 2016-01-19.The United States is trying to contain China (and Russia) and prevent them from becoming even a regional power. Possible American dominance over the South China Sea implies holding a stranglehold on Chinese import and export routes, implies cornering this large country that may react might feel forced to (over)react. Are we in for another Pearl Harbor?