Making things even worse, it is questionable if the Aktobe event was prepared by Wahhabis or other Islam terrorists. Religious extremists usually do not attack gun shops and military units, but prefer bombings and random mass killings1)Kazakhstan: Nazarbayev Embraces Color Revolution Paranoia, Source: Eurasia.net 2016-06-08. Moreover, they usually wear beards, whereas most of Aktobe assailants were clean-shaven2)Nazarbayev believes that in the tragedy of Aktobe blame the “color revolution”, Source: The Newspapers 2016-06-09. Radio Liberty attributes the responsibility for the attack to the “Army for the Liberation of Kazakhstan,” which, according to officials and some other experts, does not even exist. The level of misinformation is enormous.
As long as the oil price was high, Kazakhstan was regarded as one of the fast developing countries in the world. But this is not the case any more and some big problems may emerge.

1. Succession after Nursultan Nazarbayev
The current President of Kazakhstan has ruled since 1989. He was in charge even before this former Soviet Republic regained independence. Despite being 75 and allegedly having health problems, he has not announced any clear succession plans, so plenty of groups of interests may have started a battle for power. So much so that Nazarbayev unconvincingly if irrationally puts the blame for the unrest (1,000 people detained during protests) on all likely and unlikely enemies: Western countries, terrorists, and even Russians.

The April and May protests are allegedly “organized and funded” by Tokhtar Tuleshov, the main conspirator and entrepreneur from southern Kazakhstan with close ties to Russia and  with a debt of $100 million3)Nazarbayev on the Rocks: ‘Terror,’ ‘Coup’ Claims Shake Kazakhstan, Source: The Moskow Times 2016-06-08. Tuleshov has also been in charge of the Centre for the Analysis of Terrorist Threats, a Kazakh subsidiary of Russia-based organization known for anti-Western articles.

2. Russian minority
Nazarbayev’s resentment against Russia has been growing since the annexation of Crimea and since Vladimir Putin vowed to ‘actively defend’ Russians living abroad4)Putin Vows to ‘Actively Defend’ Russians Living Abroad, Source: Atlantic Council 2014-07-02. Russians make up only 22% of the 17-million Kazakh population, while in 1989 the numbers of Russians and Kazakhs were almost equal. However, the Russian minority in Kazakhstan is concentrated on the north of the country, where in some regions it constitutes even more than 70% of the population. 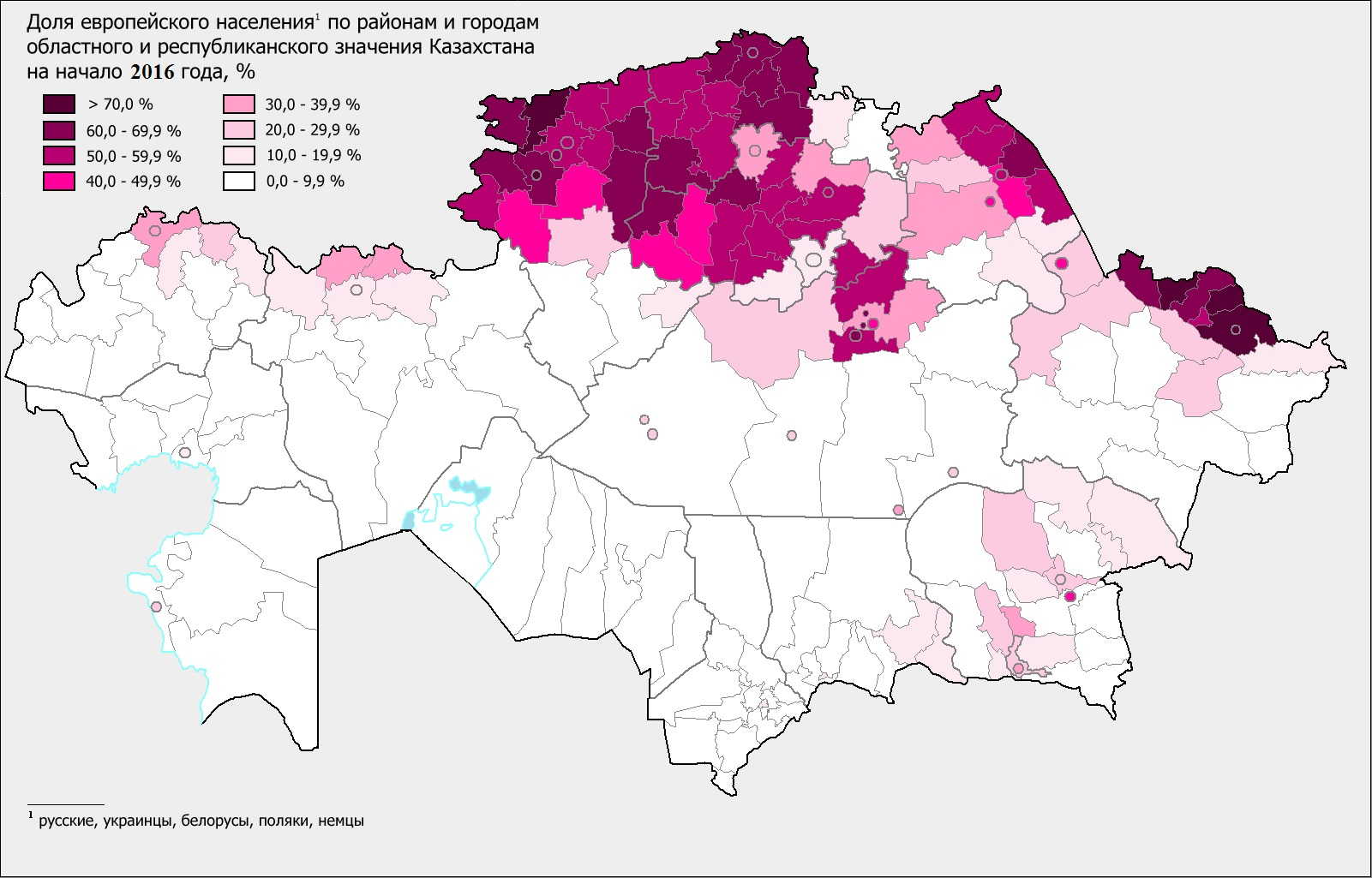 In cities, like Kostanay, Russian is the main language and Orthodox Christianity is the dominant religion. The Russian culture in many countries “has become the object of harassment and persecution,” as Valentina Matvienko, the speaker of the Upper House of the Russian Parliament, claims5)Matvienko: I Can’t Bear To See Russians Facing Harassment Abroad, Source: Charter97 2016-06-06. Just imagine what can happen if the power over the country goes to a new pro-western or pro-Turkey Islamic government (Kazakh is a Turkic language and these countries have deep relations). Post-Soviet borders are not eternal.

3. Global game over Kazakhs’ heads
Kazakhstan used to be a Russian-dominated territory since 18th century, but it is not any more. In 1999 Kazakh exports to Russia accounted for 20 percent of all exports6)Kazakhstan – International trade, Source: Nations Encyclopedia 2016. While Russia has remained its largest source of import, China has become the main export partner and outperformed Russia in Kazakh’s total trade7)Eurasian integration: Caught between Russia and China, Source: ECFR 2016-06-07.

The biggest exchange of commodities is carried out with the European Union, anyway, even if Kazakhstan belongs to the Eurasian Economic Union, which was set up by Russia. However, Central Asia is becoming the Chinese influence zone, as Xi Jinping’s administration has much more to offer. The “One Belt, One Road” initiative is far more attractive in terms of both economic growth and geopolitical importance. 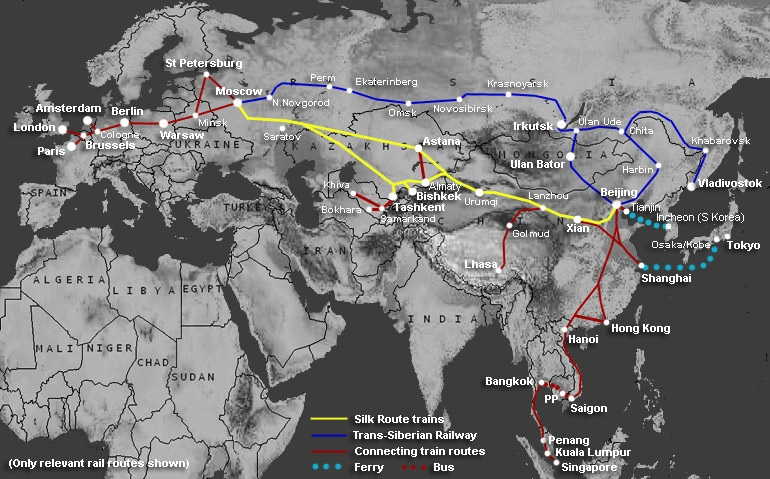 Moreover, Kazakhstan is open to a cooperation with NATO,  Russia’s biggest adversary. Nazarbayev’s nation has been a participant of NATO’s Planning and Review Process since 1994. As we can read in The Astana Times, “The country views its strategic partnership with NATO as an opportunity to integrate into international security systems in order to reinforce national security by making use of the enormous military, technical, and economic potential that this organisation and its members possess.”8)Kazakhstan Joins NATO ‘Planning and Review Process’ Discussions, Source: The Astana Times 2016-06-02 The same aspiration has led Ukraine to the conflict with Russia. Kazakhstan is a founding member of the Shanghai Cooperation Organisation, which is a political and military organisation that emerged in opposition to NATO.

4. Oil and Islam
Kazakhstan’s geopolitical position is very interesting, as it is not only the largest Central Asia’s nation and the fastest overland train route from China to Europe, but also has enormous oil reserves in the west of the country. The drop in crude oil price has heavily damaged Kazakh economy, as the exploitation of the Caspian oil fields is among the most expensive in the world. Nevertheless, Chevron and its Consortium plans to invest $37 billion in Tengiz oil field9)Chevron-led Consortium to Invest Up to $37 Billion in Kazakh Oil Field, Source: The Wall Street Journal 2016-05-25. An interesting coincidence: Chevron also invested in Ukraine before the revolution in the hope of fracking shale deposits, but eventually withdrew from the East-European country in the mid 2015. And as we could learn from history, the US have no constraints in protecting its business interests in the world. 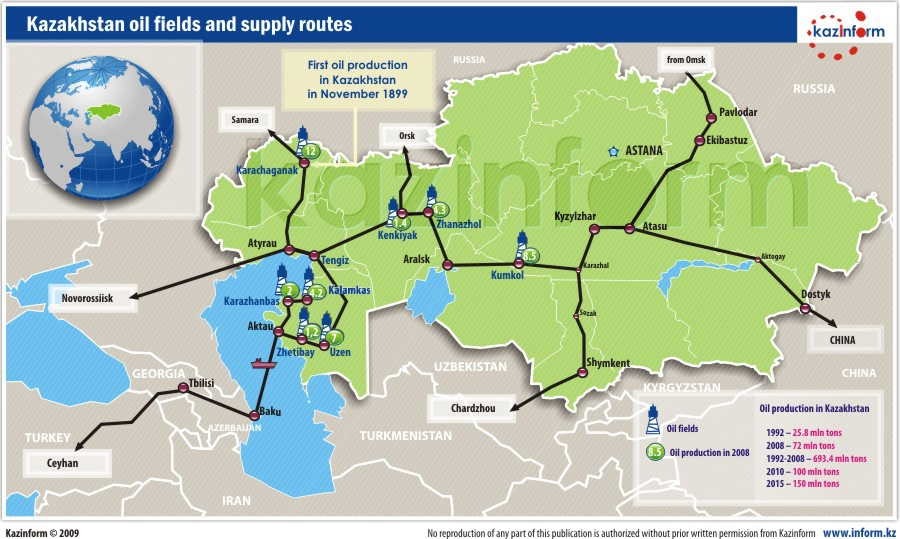 Kazakh oil fields are located in the west of the country. Paradoxically, this is the poorest part of the nation, regarded as the hatchery of radical Islam. The reason is that all the money dug from the oil goes to Astana and Almaty, Kazakhstan’s two largest cities10)Why Do So Many Bad Things Happen To Western Kazakhstan? , Source: RFERL 2016-06-06. Income disparities may cause general discontent in western cities like Aqtobe, which can be used by external or internal powers to seize power. Religious sentiment may arise, especially since the Muslim population has increased to make up 70% of the total.

Summary:
Kazakhstan is facing a series of threats that might destroy the country’s stability. Succession uncertainty, power struggle of internal elites and external superpowers, access to oil fields and Islam insurgency may push the nation into chaos similar to that in Ukraine. There is hope, though. Chinese diplomacy might be greatly involved in keeping peace in its neighbouring country, which is the sine qua non condition to establish the New Silk Road.