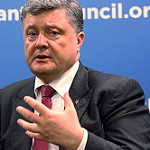 At least that’s what Yegor Firsov says, a former deputy to the Ukrainian Parliament, and head of the Donetsk Udar Party. The forty-odd-year-old lawyer made the headlines when he announced his resignation from his participation in the Petro Poroshenko Bloc. He did not want to be privy to the process of hushing up corruption, he said1. So long as Minister Igor Kononenko and Attorney General Viktow Shokin were at the helm of power, said Yegor Firsov, that long he could not participate in the doings of the presidential bloc.

Poroshenko is no mafioso, Yegor Firsov hastened to explain. Poroshenko had the job of the country’s president to do. Surely, the young politician thought it not too wise to turn the head of the state against him. The trouble is, he continued, the president is surrounded by economic predators. People who have been using their administrative positions to amass their personal capital2.

It was not corruption alone, Firsov went on to say. It was also the way policy was made. Like the incorporation of he Udar Party into the Petro Poroshenko Bloc. The decision had come somewhere from on high. No one was asked, no one was consulted, no discussion took place. Do we still live in a feudal-like political structure, asked Firsov3. So he protested. And he exposed machinations involving money.

The response from the presidential bloc came swiftly and was expected. Yegor Firsov was deprived of his mandate as a deputy. Not by a court of law. Not by the vote of the whole parliament. By his party comrades or, to be precise, members of the Petro Poroshenko Bloc4. The expulsion was substantiated by Article 81 of the Constitution, which empowers political parties to suspend their members as parliamentary deputies5. So, Firsov left the Bloc and in retaliation for it the Bloc deprived him of his rights as a deputy. As simple as that. At first Yegor Firsov said he would appeal against the decision as a politician and as a simple citizen. Then he changed his mind. Because now, as he put it, law is construed to please the president6. Appellants need not bother. He will certainly continue his political career, joining a party that will best suit his views. But that’s the future.

Firsov believes he has done the right thing. Why? Because nothing is honest about Ukrainian politicians. “All the parties are fake. Parliament is fake. There are 5-6 oligarchs who have everything under control and everybody is in their pay. Parliamentary deputies are mere playthings in their hands, serfs in a word.”7

Of the two motives that he mentioned, corruption and dictatorial measures in managing party politics, which was the most important? Which served merely as a cover-up for the real reason?

Corruption among the Ukrainian elites is no news. And no secret. Word is spreading among the population that one corrupted regime, that of Yanukovich, has been replaced with another, that of Poroshenko. Firsov is of the same opinion8. Every party, every group, every politician seems to be some part of it. The only question remains to what extent. Firsov is by no means the first one to leave the Petro Poroshenko Bloc. Is there a power struggle budding in Ukrainian political life? Maybe we are witnessing the birth pangs of a new opposition, a new political deal?