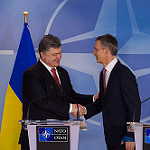 Two years have passed since Yanukovich was deposed and, as it turns out, another ruthless clan of oligarchs has taken power. No wonder then that Ukraine is heading for a new wave of violence and chaos. Oligarchs are fighting each other, the IMF is pulling out of the country, officials issue laws and regulations only to see them repealed within a day or two by others, and raided European companies are leaving the country after being robbed by the so-called pro-Brussels oligarchic elite.

It was evident from the beginning that the US and NATO-sponsored power transition was doomed to fail. Prime Minister Yatsenyuk made no secret on his personal website about his principal partners, NATO and Victor Pinchuk’s foundation. Victor Pinchuk is a link between the Ukraine corrupt oligarchic establishment and the Western political elite. In 2005, the BBC depicted him as a paragon of Ukraine’s kleptocracy: “Ukraine’s largest steel mill has been bought by Mittal Steel for $4.8bn (£2.7bn) after an earlier sale was annulled amid corruption allegations.

The Kryvorizhstal mill was originally sold to the son-in-law (Mr. Pinchuck) of former President Leonid Kuchma for $800m.
It was one of the scandals that sparked the Orange Revolution and propelled President Viktor Yushchenko into power.”1)Mittal wins Ukraine steel auction Source BBC 2005-10-24

Directly after the power transition, European leaders understood that the situation in the Ukraine was unmanageable, which we know from a confidential telephone conversation between Minister Paet (Minister of Foreign Affairs of Estonia) and Mrs. Ashton (High Representative of the Union for Foreign Affairs and Security Policy) that became public. Both politicians understood that the Maidan protesters had no trust in the politicians who formed the new coalition. Mr Paet said, “there is now stronger and stronger understanding that behind snipers it was not Yanukovich, but it was somebody from the new coalition”2)Breaking Estonian Foreign Minister Urmas Paet and Catherine Ashton discuss Ukraine over the phone Source YouTube 2014. Their conversation makes it clear that both European politicians understood that, contrary to the official statements coming from Brussels, Europe has no solution for Ukraine’s problems and no trust in its new leaders.

Petro Poroshenko, one of the oligarchs, became the fifth president. In line with his predecessors, he had amassed an astonishing personal wealth by mixing politics and business on behalf of the Ukraine population. He started his career under the notorious President Kuchma and served as a minister under deposed President Victor Yanukovich. One can hardly imagine a more troubled new president for a country that has to reform itself and get rid of corruption.

Within months after the power transition, investigative journalist Tetiana Chornovol, who lead an anti-graft body, quit, calling her time in the government “useless” because there was no political will to conduct “a full-scale war”4)Ukrainians See Election Reviving Lost Ardor for Change Source Bloomberg 2014-08-21 on corruption.

In the two years that followed rumour of ongoing corruption has not ceased. For Poroshenko and his fellow oligarchs, the biggest threat is not Putin and the separatists in the East, but the pro-Ukraine militia that only on paper were merged with the Ukraine army.

The militia regards the Western-backed oligarchs as the second biggest threat to the Ukrainian nation. We believe the oligarchs are the primary cause of the rot in Ukraine’s government.

Meanwhile, the Brussels elite is trying to sell the Ukraine 2014 power grab and the resultant association treaty as a way to help Ukraine to overcome its political corruption.

The Dutch government wrote in its communique to its citizens: “This cooperation gives Ukraine a chance for a better future. The country wants to become a genuine democracy, without corruption and with a wealthy population. The European association treaty is the foundation for the national reforms.”5)Q&A Association Treaty Source RTL 2016-02-18

Maybe this is the intention of many naive European politicians, it is not the intention of the Ukrainian elite who under Poroshenko consolidate their power. The Swiss-based company Swissport, a leading airport service company, and its French investors learned this the hard way.

“Swissport, the Swiss ground handler stands to lose some $8m in assets in the Ukraine while other foreign investors could shun Ukraine, following an attempt to forcibly strip the company of its majority stake in Swissport Ukraine.
In a move alleged to be ‘corporate raiding’, an increasingly common phenomenon in the country, 30% shareholder of Swissport Ukraine, Ukraine International Airlines (UIA), has claimed that Swissport International (SPI) violated its minority rights – a “baseless” allegation, according to the handler. During interim court proceedings the judges were changed twice – at the very last minute – before the hearings.”6)Swissport faces ejection from Ukraine following ‘corporate raid’ Source The Loadstar 2012-11-12

During the reign of Yanukovich, Kolomoyskyi (Poroshenko ally) try to strip Swissport from it assets. It did so by forcing the company to sell its multi-million majority stake for 400.000 dollars, using the corrupt Ukraine administration and the justice system. We cannot blame the company that it believed its problem was solved in 2014. The Washington and Brussels elite presented the new Kiev government as a tool in the fight against inherited Ukrainian corruption. During 2014 Swissport seems to have fought a successful battle against injustice. But at the end of 2014, the highest judicial body in Ukraine ruled that the company had to sell its multi-million investment to Kolomoyskyi for 400.000 dollars. The company said that it never received the 400.000 dollars from Mr. Kolomoyskyi.

Ihor Kolomoyskyi is the founder of the Brussels-based European Jewish Parliament that served to increase his influence in Brussels. A worrisome sign that Ukraine’s political rot is spreading into the European Union.

The Swissport raid and forceful eviction from Ukraine was an embarrassment for those who tried to uphold the illusion that Ukraine was in the process of becoming a genuine democracy free of corruption.

It could hardly be a surprise that a year after the Kyiv Post publication that Swissport had left Ukraine7)Swissport exits nation after losing legal war Source Kyiv Post 2015-01-23, Aivaras Abromavičius, Ministry of Economic Development and Trade of Ukraine in Yatsenyuk’s cabinet and one of Washington’s principal allies in Kiev resigned8)Economic minister’s resignation plunges Ukraine into new crisis Source The Guardian 2016-02-04.

After Abromavičius it was Vitaliy Kasko, Deputy Prosecutor General that resigned due to unstoppable corruption. On 15 February Deputy Prosecutor General Vitaliy Kasko wrote in his resignation letter: “…This desire is based on the fact that the current leadership of the prosecutor’s office has once and for all turned it into a body where corruption dominates, and corrupt schemes are covered up. Any attempts to change this situation at the prosecutor’s office are immediately and demonstratively persecuted.

A day later General Prosecutor Victor Shokin, who analysts say, is an ally of President Poroshenko, had to quit. Viktor Shokin agreed to step down after President Poroshenko asked him to leave office; the Western leaders and reform-minded Ukrainian officials had long been calling for Shokin’s resignation10)Ukraine’s Prosecutor General resigns Source Ukraine Today 2016-02-16.

At the same time, Ukraine is heading for a standoff between its two most powerful politicians after Prime Minister Arseniy Yatsenyuk has defied President Petro Poroshenko’s call for his resignation and defeated a no-confidence motion in parliament11)Ukraine crisis: Poroshenko asks PM Yatsenyuk to resign Source BBC 2016-02-16.

The current chaos in Kiev makes it for the IMF extremely hard to keep Ukraine funded12)Ukraine’s huge bailout is at risk Source CNN 2016-02-10. Brazil’s IMF Director already in 2014 urged not to bend rules for Ukraine13)Brazil’s IMF Director Urges Lender Not to Bend Rules for Ukraine Source Bloomberg 2014-03-07. Ukraine had failed the IMF twice before. There is now a sense of panic in Kiev, and so Ukraine leaders start to issue opposite orders. The Central Bank Governor’s ban on money exchange was repealed immediately by Yatsenyuk14)Ukraine central bank abruptly reverses currency trading ban Source Reuters 2016-02-25.

The situation of the population is deteriorating rapidly because of Ukraine’s currency fast devaluation and a spike in bond yields. Companies start to understand that direct investment can disappear overnight as raided foreign companies are forced to leave the country. Protesters take over Hotels in Kyiv and return to Maidan15)‘Right-Wing’ Protest: Partial hotel takeover and tents in the middle of Ukraine’s capital Source Ukraine Today 2016-02-21 to demand the resignation of the Ukraine rulers who came to power with the support of Washington and Brussels. Yatsenyuk now becomes a liability for his partner NATO.

It is just a matter of time before the Ukraine nationalistic militias take power, resulting in a definite split of the country. Poroshenko can postpone the people final verdict by reviving the war in the east, but in the end, he can not escape the day of reckoning.