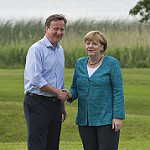 If London decides to leave the European Union nobody in Europe will even notice. Great Britain is an entirely separate country, isolated from the European Union and does not participate in the Euro or Schengen Agreement. The European Union as a political platform is disintegrating and becoming more and more irrelevant and will be displaced by the European Monetary Union (EMU).
The center of power in Europe has shifted from the EU to the EMU and London politicians are fully aware of it. A Brexit will accelerate the process of political integration of the EMU members and make the EU politically less significant.  Over the past decade we saw:

All these events hardly changed the life of the Europeans. Being a member of the European Monetary Union is of another magnitude. The Greek euro crisis changed the lives of millions of Greeks. During the tense days in July 2015, when the future of Greece, the EMU and indirect the future of Europe was at stake, Chancellor Merkel and President Hollande held 24 hours emergency meetings as did the Eurogroup. Great Britain and the European Parliament did not play any role whatsoever in these decisive moments for the future of Europe. Cameron was not even invited to share his opinion.

The European Monetary Union is doomed for further political integration; the euro members have no other option but to create a fiscal union and a banking union. Without these two pillars, the whole Euro will fall apart dragging with it the complete Western financial system. A fiscal and banking union means that these countries have to integrate far beyond the European Union framework.

Prime Minister Cameron is an annoyance for the already struggling EMU. The European Monetary Union faces extreme difficulties, as on one hand further integration of the Euro countries is inevitable and on the other hand, the widespread support for this integration is eroding.

In 2011, French President Sarkozy told Cameron:”We’re sick of you criticizing us and telling us what to do. You say you hate the euro, you didn’t want to join, and now you want to interfere in our meetings,”1. The EMU countries face a big political problem that is to be solved. Germany and France will never let countries outside the EMU have a say in their affairs as Cameron proposed. The diplomatic words from French Prime Minister Manuel Valls make it all clear to London as he said; “a Brexit is a shock for Europe but still members can not pick and choose rules that suit them”2. The UK leaving the European Union will make life easier for Paris and Berlin as Figaro writes: “Brexit? An opportunity for Europe, for France and for Paris”3
When the UK is outside the European Union Frankfurt and Paris will have more opportunities to crush London as a financial center. London could not miss Merkel’s warning against gains for British banks under ‘Brexit’4. If the UK decides to leave, Berlin and Paris will do definitely more than prevent London banks from making any gain; they will do everything to establish Paris or Frankfurt as the financial center of the EMU at London’s expense.

With the UK outside the European Union and losing all its influence on the continent, Frankfurt will be able to force its will on euro transactions that are done in London. We have already seen how Washington forced its jurisdiction on European banks. In 2006 European banks were prohibited from making dollar transaction with Cuba, despite the fact that these transactions were regarded as entirely legal in Europe5. French, German and Dutch banks were forced to retreat from Cuba and pay hefty fines or else they would have had to leave the US. Frankfurt and Europe can impose similar rules on banks in London and force them to comply or leave the EMU area. Some in London, like top diplomats are already aware of this as Sir Nigel Sheinwald, Sir John Grant and Sir Stephen Wall, warn that rival financial powerhouses, as Paris and Frankfurt, will not be sentimental in seeking to challenge the City’s prominence, if the referendum result is to leave the EU.6