It was a political decision to down the Su-24, and it reflected more the growing impatience on the part of the Turks at the Russian military actions in Syria rather than an exasperation at the violation of Turkish airspace. The decision also showed Turkish shortsightedness and political immaturity. It was a blow to Russia, one that may lead to far-reaching international consequences. The long-term consequence for Turkey may be the loss of some of her territory to Kurds.

The course of events and their background

If each single violation of a country’s airspace were to lead to the outbreak of hostilities, we would long have had world war three that would have erupted in the region of the Baltic states where such incidents caused by Russian and NATO pilots are far from being rare. The long accepted practice is that in such cases the pilots of both sides try to make eye contact in order to identify the intruder beyond any doubt. Then the alien craft is escorted out of the country’s airspace.

The Russians had violated Turkish airspace on a number of occasions prior to the downing of their jet; and they had been duly warned of the consequences. The warnings had been repeated also on Tuesday before the dramatic event took place. It was all reported by Can Kasapoglu for die Deutsche Welle:

This might lend support to the Turkish claim that the approaching aircraft had been warned ten times as the Russians were operating in the vicinity of the southernmost part of Turkish territory cutting into Syria. And here’s the key to understanding the event. A cursory glance at a map and simple arithmetic are enough to make us understand the indignation felt by the Russians.

The Turkish territory surrounded on three sides by the area belonging to Syria over which the event took place has a width of 2,5 km. Assuming the Russian aircraft (there were two of them) picked up a speed of 1200 km/h (which is not its maximum velocity), the flight over the said Turkish territory would have taken them 7-8 seconds, not the 17 claimed by the Turks. The identity of the planes could not have been established within so short a spell of time, which was borne out in the official statement according to which the pilots had no idea who they were shooting at1. 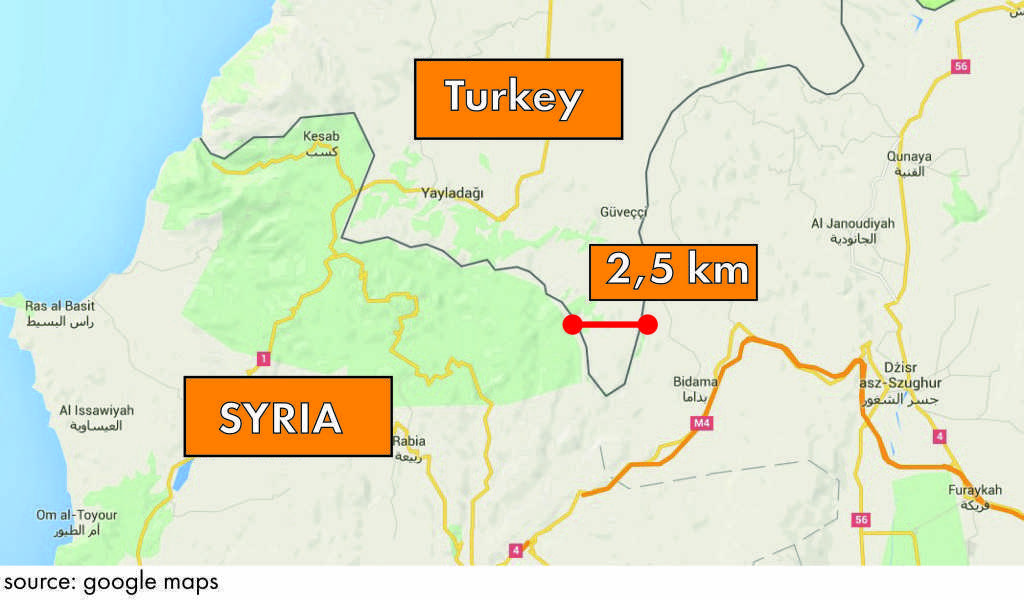 They either did not have an idea or they did not care to make sure; Russians are known to have been operating over the area occupied by the anti-Assad rebels for a long time. It seems the Turkish pilots knew what the target was, and the order they received was well thought out. Since the time of the flight through Turkish airspace was short, the Turkish F-16 must have been in a hurry launching their missiles. The downing of the jet is then highly likely to have taken place beyond the Turkish border.

To make the picture complete, the event must be placed in its wider political setting. In Syria the Russians combated among others Turkmen troops that are opposed to President Bashar al-Assad. The Turkmen army may be up to 10 thousand men strong2, with the Turkish speaking population being the third largest in Syria after Arabs and Kurds. Russians attacking Turkmen are for Turkey what Americans attacking the troops of the Donetsk People’s Republic would be for Russians. That must have exasperated Turkey, and the anger reached its climax when Russia started aiding President Assad, the archenemy of Ankara. President Recep Erdogan and Turkish politicians seem to have had reason enough to make an attempt at thwarting Putin’s plans. Turkey did not like the Russians cutting off the oil supply routes from ISIS and the prospects of having a global alliance against Islamic State. Throwing a monkey wrench into the NATO-Russian coalition in Syria and Iraq may have been among the targets that were taken into consideration in Turkey and the USA.

1. The broad coalition between the West and Russia in combating ISIS has become unreal. Russia and France are likely to insist on commencing cooperation and the resultant coordination of the actions; Turkey will voice her objections, being tacitly backed by the USA, which is not eager to fight arm in arm with the Russians because of the divergence of their political interests in the region. It was these two states that were interested in having the Russian Su-24 shot down in order to prevent the anti-terrorist alliance from taking shape and framing Russia up with aggression.

Russia wants cooperation because it will make further steps possible and finally result in having the sanctions lifted. Russian ambassador to France Alexander Orlov told Europe 1 radio: “There may be several kinds of coalition. First is coordination, which is a necessity, but we’re willing to take things further, to jointly plan strikes against ISIL. For that purpose, we could create a joint general headquarters together with France, the US and all other countries willing to join the coalition.” The coalition may not include all the countries concerned; still, the cooperation between Russia and France will probably be further developed.

2. Kurdistan as a separate state. It is highly likely that Russia will respond to the Thursday incident by supporting Kurds. Not officially, though, so as not to further agitate Turkey. Russia may satisfy the Kurds’ requests and transfer arms to the PYD (Democratic Union Party), the Syrian branch of the PKK (the Kurdistan Workers’ Party), operating in northern Syria. A strong Kurd minority will not as objectionable to President Assad as it would be to Turkey, inhabited by some 15 million of tchem.

Kurdistan as a separate state is all the more possible if it is backed not only by Germany and the USA but also by Russia. International recognition is one of the prerequisites for a statehood.

3. Less intense economic cooperation between Russia and Turkey, especially in energy economics. The military cooperation between the two countries has already come to a standstill. The talks on the construction of the ‘Turkish Stream’ have been uneasy: the hostility between the two countries might put an end to the whole project. Turkey cannot take too bold steps against Russia, since Russia supplies 60% of Turkey’s gas demand; and conversely, Gazprom cannot afford the loss of such an important recipient of its exports.

Also the Akkuyu project, the construction of a nuclear power plant in southern Turkey by the Russian state-run Rosatom, might not come to fruition. It was not long ago when Turkey announced the acceleration of the works3, now the Russians intend to ‘reconsider’ the investment4, though this ‘reconsideration,’ as Presidential Spokesman Dmitry Peskov put it, might be construed to imply a mere threat because giving up on the project would be tantamount to a substantial loss incurred by Rosatom.

4. The Turkish tourism sector will suffer losses. This process is already under way as Foreign Minister Sergey Lavrov has stated that Russians cannot feel safe in Turkey5. It is worth bearing in mind that the Mediterranean is a very popular tourist destination with Russians. Some 4,5 million Russians visited Turkey in 2014 alone, leaving there 4 billion dollars6.

5. Repercussions in Ukraine. The situation in Ukraine is still vulnerable with each day bringing reports of firefights or preparations for an offensive. Turkey may in further retaliation begin to support Crimean Tartars in their attempt to restore Ukrainian dominion over the Crimea.

6. Repercussions in Russia. Russian propaganda certainly braces itself to explain to the public why two Russian pilots (from the downed plane and the chopper taking part in the rescue action) had to die. A repeat of the Afghanistan scenario is what Russian citizens fear most; this may significantly lower the backing for the intervention in Syria and for President Putin.

7. Deployment of S400 system. The Russian deployment of the S400 anti-aircraft system covers 70% of the territory Syria and reaches deep into Turkey, Lebanon and Northern Israel. It will be used to protect Russian planes. The deployment of the advanced defense system makes it impossible for the Turks to shoot down another Russian aircraft without evoking an immediate retaliatory response. The deployment also complicates US actions against ISIS from Incirlik Air Base as US planes, entering Syria from Turkey, are now a potential target for the combined Russian-Syrian advanced air defense systems.

8. The NATO alliance starts to crumble. In 2013 NATO sent Dutch, German and US patriot systems to Turkey as a symbolic statement against a non-existing threat from Syria. In January 2013 the alliance wrote on its website:  “The Alliance’s actions are purely defensive. They show solidarity with an Alliance member with security concerns. These defensive actions aim to contribute to a de-escalation of the crisis along the Alliance’s border7.” The current NATO’s reaction shows the alliance is not willing to support its member state Turkey. It is the first time since the Cold War ended a NATO member has downed a Russian plane. Now NATO allies appeared eager to reduce tensions and stressed the need to minimize the risks in Syrian and Turkish airspace. It is not to be expected the in August retreated Geraman and US Patriot systems will be redeployed soon8.

3. Turkey says it will speed up work on nuclear power plant with Russia Source: Hurriyet Daily 16-11-2015