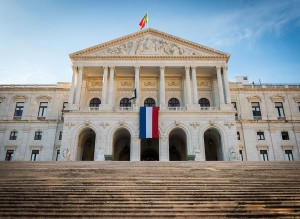 Portugal is one of the European countries that was the most affected by the financial and Euro crisis. In 2012 interest rates on Portuguese bonds reached more than 17% and public debt reached 124% GDP. The Portuguese financial crisis led to an international rescue plan agreed upon by the Portuguese government on the one hand and the European Union, the European Central Bank and the IMF on the other. Portugal is a Euro-Zone member which is why the country cannot devalue its currency. With fiscal devaluation, tax cuts on labor that is compensated for by an increase in VAT, Portugal and European authorities try to improve Portuguese competitiveness. The troika pushed for labor market reforms such as lower wages and the reduction in unemployment benefits. The reforms were carried out by the Partido Social Democrata PSD and the Centro Democratico Social CDS (both members of EPP), a coalition government headed by Passos Coelho, who took over from the Socialists in 2011.

Portugal had parliamentary elections on October 4th, when the coalition was punished by losing 25 MPs and thus the majority they had held in the chamber. 12 days after Passos was appointed by President Cavaco Silva to form a minority government, socialist leader Antonio Costa headed a left-wing coalition that brought down the government. The political maneuver of the leftists was the first of its kind for the forty-one-year old democracy.

This week all opposition parties submitted their motions to dismiss the government, which was followed by separate meetings of the Socialist Party (S&D) with the Communists (GUE), Left Block (GUE) and the Greens (GUE), and resulted in signing the political agreements and compromises that allow the Socialists to form government1.

The final texts2 that have been agreed upon impose a certain logic for the state budget on the whole legislature and a logic on all measures that the parties might take relative to the budget. To ensure that parties are complying with the terms of the agreement, there will be follow-up mechanisms.

Portugal’s outgoing President Cavaco Silva has little choice but to adhere to the parliamentary agreement put forward by the left parties as the Passos administration has shown no will to take the role of a caretaker government3. Cavaco is postponing his decision which is expected to be announced “as late as the end of next week.”4

Despite the negative reaction from the markets earlier this week, with the stock market falling by 4% and bond yields rising across all maturities, adjusting negatively with the prospect of a more lax fiscal stance5 the markets picked up back to positive ground at the end of the day.

This move calls into question the grand-coalition model preferred by Brussels and sends an important signal to neighboring Spain, whose upcoming general elections are being marked by a debate between separatism and the end of austerity. Furthermore, the fall of the Passos government puts an end to the unflappable Portuguese support of the Merkel-Schäuble diktat in Europe6.

With thanks to Pedro Simoes

1. Government will be overthrown today. And four times in a row Souce Diario De Noticias

2. Left of the agreements signed in secret in Parliament Source Diario De Noticias